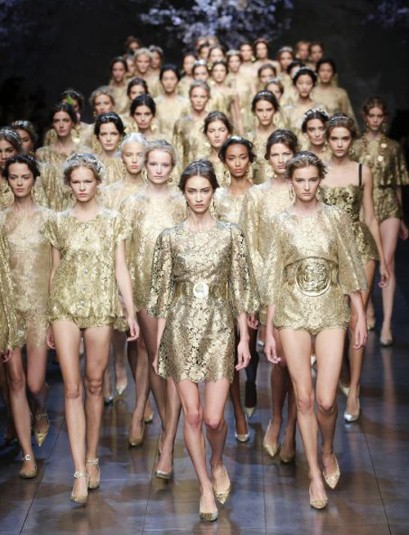 McGrath blended Dolce & Gabbana blush in Rosebud, Apricot and Peach over immaculate but illuminated skin, before adding a smudge of eyeshadow in Fortune to the cheekbone – for real Italian cheekbones. On the eyes Gold and Desert shadow were used, again from Dolce & Gabbanna, for a “deep gilded look,” with a bronzed flecked liner added along the lash line. The obvious lipstick choice? Bellissima and Traviata (launching next spring) for what the fashion label described as a “warm decadence.”

Team Telegraph thought it did itself proud last night at the Moschino after party. When the other Brits scarpered back to their hotels, we were on the dance floor. Our reward was Gloria Gaynor taking to the stage for a mini set (with Rossella Jardini and sundry model legends both past and present acting as an uber fashionable Pan’s People). Obviously the highlight was I Will Survive. Life cannot get more glorious, camp, we thought, as we jostled with various Moschino-clad trannies. But then we heard the Grazia team had actually gone up to Gloria much, much later in the Hotel Principe bar and had their photo taken with her. OK, Grazia girls, that makes us even.Lisa Armstrong

A technical failure may have put paid to Marni’s plans for atmospheric music and lights, but the show went on, and to much aplomb. The sport-luxe vibe seems to have gone down a treat with the twittersphere, and with us too. SEE THE SHOW IN FULL HERE.
Photos: AFP/Getty

TREND AD-VISOR
We haven’t worn a visor since the Nineties, but Marni’s got us seriously considering digging ours out for next summer. All we need is a trip to the John Lewis haberdashery department to get some pimping-up equipment.

MARNI’S MALFUNCTION
A technical issue at Marni this morning meant the whole show had to be conducted in eerie silence – quite a change from the thumping beats that usually punctuate a catwalk show – and without snazzy lighting, it didn’t seem to matter though…

Moschino’s anniversary show celebrated some of the label’s greatest hits, from the bin bag dress to the nun’s habit, by enlisting a flurry of famous models from yesteryear to join Jodie Kidd, Erin and Alek Wek on the catwalk. Pat Cleveland, Violetta Sanchez, Amalia and Gisele Zelany all pulled out their best poses to a live performance of I Am What I Am by Gloria Gaynor. SEE THE FULL SHOW HERE.
Photos: Rex

THE COMEBACK KIDD
Jodie Kidd made a triumphant return to the catwalk last night walking in Moschino’s 30th anniversary show alongside Erin O’Connor. “So lovely to be back with ma girls its been to long!!!” tweeted the mother-of-one, who has just been signed by Next Model Management, as she posted a picture of herself with fellow Moschino model Alek Wek backstage.

NEWSFLASH: HEELS ARE OUT
Is Anna Dello Russo, the high priestess of vertigo-inducing heels, feeling quite well? She was spotted today in Milan in flat biker boots looking positively low-key. Meanwhile French Vogue’s editor Emmanuelle Alt has taken up the mantle to revive the baby kitten heel, picking up where Theresa May left off.

JIL SANDER: A MINIMALIST DREAM
“Today Jil Sander gave the dedicated minimalist pretty much all they could ever want: monochromatic outfits that won’t require their wearers to repeatedly explain, ‘actually, no, i don’t work in this restaurant’.” Read Lisa Armstrong’s review in fullhere.

FASHION WEEK DIETS: WE’RE #HACKEDOFF
Those of you who are following team @Telefashion on Twitter will have been bombarded with diet tips from our fashion editor Lisa Armstrong @LisaDoesFashion today – sadly these are not pearls of nutrition wisdom but the result of a Twitter spam, so please ignore them. (For the record, we’re on the 5-2 bandwagon at the moment. Working wonders.)

ROBERTO CAVALLI: FIRING ON ALL CYLINDERS
Roberto Cavalli is Milan’s most reliable source of high fashion high-drama. Off the catwalk this week the Florentine designer has been feuding with Flavio Briatore, the former chairman of Queen’s Park Rangers – who unsportingly accused Cavalli of “freezing his brain with botox.”
Today came the riposte. This was a collection that proved all Cavalli’s synapses are still firing in a show that featured more bare leg then Loftus Road on match-day and was much more entertaining to witness.
This Hollywood-themed show featured siren gowns a-dapple with Cavalli’s trademark python-print chiffon, real python and enough silver-tipped tassling to open a curtain concession in Dubai. When softly fitted in black or silver the gowns had a delicate flapper feel to them. Cut higher they flashbacked to a less innocent aesthetic. Translated into percolated and panelled jeans and croc-skin bikers they accelerated into Easy Rider territory; backstage it took two-person teams to tie up the webbed spaghetti-strand shoes. If Cavalli was a Hollywood director it would be Michael Bay.Luke Leitch

ON THE STREET: Fendi’s Monsters
Fendi’s monsters are hanging off all the most fashionable handbags in Milan – Giovanna Battaglia is the latest editor to tote one – and you can get in on the act by heading to Browns , where they’re priced at £425.

JIMMY CHOO MEETS KEW
Choo meets Kew in an insect-inspired jungle collection – with a bit of bondage in there too.
Gladiator knee-highs in rope that rioted up the calf like vines around a tree-trunk, a black beetle clasp on a snakeskin clutch, and leaf-relief print on a pair of slip-on trainers – Sandra Choi’s jungle inspiration for next summer’s Choo collection was pretty clearly telegraphed today. Just in case the penny didn’t drop, Choo’s Milan showroom was decorated with more foliage than a Kew Gardens glasshouse. Choi, who recently gave birth to a very pretty baby girl, said that had perhaps informed her new collection: “It’s about drawing inspiration from what is around us – the beauty of Mother Nature. Nature doesn’t get it wrong. There is a sense of being comfortable in your own skin. I took inspiration from insects – whether it’s a beetle or a butterfly – and from the pattern and intricacy of plants and leaves. And there is sense of metamorphosis and movement there too, and the sense of change from ‘look-at-me’ to camouflage.”
Choo being Choo, this all-natural theme had its fair share of visceral, tooth-and-claw drama. Choi said those rope gladiators made her think a little of bondage, and there were plenty of 120mm heartbreaker heels. Rainbow snakeskin clutches and matching sky-high sandals were eye-catchers. This was another strong outing from Choo 2.0: Sandra Choi is on a roll. Given that inspiration, though, would she advise her customers to think twice before using her shoes to obliterate any insects next summer? “Maybe – unless it’s a mosquito – in which case, go ahead!” Luke Leitch

Designs from the spring/summer 2014 collection at Jimmy Choo.

HOT OFF THE CATWALK (LITERALLY)
Cara Delevingne and Georgia May Jagger played post-catwalk swapsies last night, as Jagger’s Fendi catwalk dress ended up on Delevingne at the brand’s exhibition launch.

BIZARRE BEAUTY: PIN HEAD GLAMOUR
We’re just getting to grips with Emporio Armani’s spring/summer hair. The brand is known for its classic down do’s, yet suddenly they go and throw a spanner in the works (and a head full of kirby grips) with plush pin heads. And as only Emporio Armani know how, they add beautiful detail by weaving hair in and around each pin like a head full of mini plaits.

SHOE DIARIES
Everyone knows the Italians are the masters of shoes, so let us introduce you to Casadei’s new offerings. A favourite of Victoria Beckham (and just about everyone who you’ve ever seen grace the red carpet) the new collection is inspired by the Moroccan Berber culture and its decorative art. We’ll take a size 5 in every style please….

OH, STARRY NIGHT
Hollywood belles Blake Lively and Cate Blanchett (below) were in the Italian style capital to attend Vogue ‘s Beauty in Wonderland event while Kate Moss, the new face of Stuart Weitzman, was on hand to help launch the label’s new store. See all the stars at the shows here

PRADA RULES
“Sometimes you have to be loud to be heard” said Miuccia Prada backstage after her show. This collection will be both heard and worn. The lens devours those zingy, saturated colours and sucked up the murals. Yet underneath the glitz lurk a slew of killer classics including kilts, polonecks, coats and envelope shoulder bags that will turn up in store unadulterated by any murals – for those who like to hang their art, not wear it. That, by the way, includes Miuccia Prada. See the full collection here

SHOES, GLORIOUS SHOES
Wallflowers needn’t apply for the spring/summer instalment of Sergio Rossi’s calf-strap sandals. With crystals and leaves, long calves will be sporting these, while if you need a bright boot to go with your new Prada fur coat, look no further than the styles below.

THE RETURN OF THE LADIES
‘Women are back’ according to the invitation from Marina Rinaldi that just dropped. Wow. Where’d we go? Did anyone miss us? And more to the point, how was the shopping? Oh and PS, what exactly is it an invitation to? Lisa Armstrong

JUST CAVALLI’S JUNGLE FEVER
Any weary fashionistas on the front row will have been jolted back to their senses during Just Cavalli’s S/S ’14 presentation. Leopard print, checks and floral motifs were all taken to the tropics for a summer collection that screamed holidays.

KARL’S COLOUR CO-ORDINATED INVITE
If Karl Lagerfeld’s Fendi invitation is anything to go by we can expect lots of pretty pink layering at the S/S ’14 presentation later today. Swoon. Photo: evachen212

POSY POWER AT BLUGIRL
Can you guess what Blugirl fans will be wearing next summer? From a-line minis to spring coats, evening gowns and all the accessories between, blooms will be the brand’s main story for S/S ’14. Photos: EPA

MAXMARA’S SLEEK SEPARATES
The icy colour palette at MaxMara was broken by jolts of orange, nude and black. We particularly enjoyed the compact headscarves. Photos: Getty

What can we expect from Katie Grand Loves Hogan for S/S ’14? Super frilly, tie-side knickers in primary colours. You can even have your ruffled pants monogrammed as modelled by Cara Delevingne, who also wears the new season 194 trainers. Photos: kegrand

ALBERTA FERRETTI’S SUNNY STAPLES
Speaking of her S/S ’14 collection Alberta Ferretti notes it was influenced by “countries where the culture of sunshine shapes the culture of life.” Cue broderie anglaise dresses dripping with neat blooms and colourful ribbons.

BLAKE’S IN THE HOUSE
Blake Lively, AKA Mrs Ryan Reynolds and the face of Gucci’s premiere fragrance, was seated next to Anna Wintour at the Gucci show; meanwhile DSquared2 invited Ireland Baldwin and Suki Waterhouse to their showcase.

SHOCK AND GAUZE AT GUCCI
Frida Giannini sprints out of the Milan fashion blocks with a Lurex and mesh sportswear mash-up.
Read the full show report here, and see all the looks here.

COCKTAILS WITH DSQUARED
The DSquared2 show was so tropical-inspired the catwalk was peppered with sand. Models could be seen chilling out at a bamboo bar, ordering D&Daquiris (see what they did there?) and glowing from the sun in a show that paid homage to the late Esther Williams. See the full show here

THE GLOSSY POSSE COME TO TOWN

On Tuesday evening, Fashion’s Night Out invaded Italy’s style capital. US Vogueeditor-in-chief, Anna Wintour, joined her Italian counterpart, Franca Sozzani, and Condé Nast chairman Jonathan Newhouse at the Palazzo Morando (pictured below). The Palazzo is staging the ‘Who is On Next?’ and Vogue Talents showcase, with designs by our favourite new shoe designer, Sophia Webster, being included in the mix. A smiley Karolina Kurkova lent her model credentials to the soirée (above left), while Anna Dello Russo looked remarkably pared-down (for once). 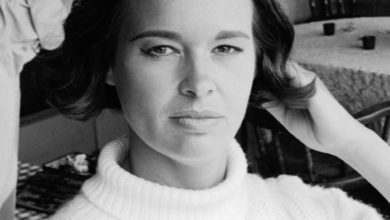 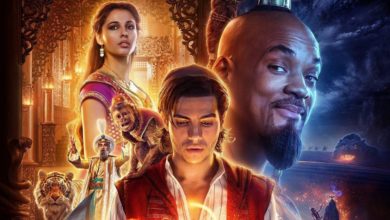 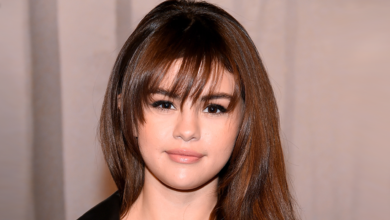 The Coach Foundation Is Giving Back With the Help of Selena Gomez and Michael B. Jordan 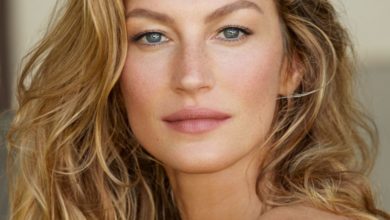 “I Never Go a Day Without Dessert”—This and More, From Gisele Bündchen’s New Book