(CNN) — So Prince William and Duchess Kate are combining work with play this week, bringing their privileged progeny, Prince George, on a three-week tour of Australia and New Zealand.

Having their own plane filled with personal staff would certainly make the 20-hour flight easier than the rest of us have it.

For one, it’s likely the royal staff don’t roll their eyes in annoyance as Kate struggles to soothe George’s wails, his little ears in pain due to changing air pressure.

Nor does she have to beat the post-dinner in-flight pee rush and squeeze into a tiny washroom to change his royally soiled nappy.

For most travelers, flying long haul with kids — particularly babies — stomps on any romantic notions of travel being about the journey, not the destination.

As a Canadian mother who lives in Bangkok, Thailand, I’ve been taking my two boys — now aged five and six — on the 20-plus-hour multi-flight journey back home to see family annually since they were born.

Here are a few key things I’ve learned along the way.

1. Before you go: Pre-order the kids’ meals

That’s where the good news ends.

To be fair, airline food has improved in recent years. But not much.

When you peel back the foil top of that hot rectangular dish, exclamations of “Man, I can’t wait to dig into that grotesque mash-up of peas and rubbery chicken” rarely follow.

And good luck trying to serve it to your average five-year-old. (Go ahead, tell me your child is a wonderful eater who loves rubbery poultry and hard peas. Liar.)

Fortunately, many airlines allow you to order child’s meals when you book your flight. This is essential — they usually only bring as many meals as were ordered, so extras are rare.

Sample dishes my kids have had on recent flights include macaroni and cheese, ravioli with tomato sauce and simple fried rice with pork. I wanted to trade, they weren’t having it.

Yes, yes. Junk food is bad, the world is getting fat.

But until you’ve experienced the horror of not sleeping in a bed for 30-plus hours because you promised your niece you’d fly from Bangkok to Cancun so your six-year-old could be a ring bearer in her wedding, you really can’t judge a mom for letting her kids rip into a pack of Oreo cookies so she can have a few minutes of peace.

On long-haul flights I always bring a few extra packs of snacks my kids are only allowed on rare occasions, along with their usual healthy goodies.

But I avoid chocolate (messy) and other high-sugar items, for obvious reasons. Now is not the time for a sugar high, but neither is it an occasion to be too rigid about nutrition.

Trust me, that little bag of potato chips is going to keep your kid quieter on those first critical moments of a flight than those organic/gluten-free/cranberry-flecked granola bars you whipped up a few hours earlier.

Regardless of what you feed your kids, the chewing makes the air pressure changes easier on their ears.

MORE: Skip the pasta! And other unsavory truths about airplane food

Some kids can sleep anywhere. Others can’t, and will meltdown into a terrifying, pig-tailed mini monster right before your horrified eyes.

Ask yourself what category your kid fits into when booking that red-eye Tokyo-to-Atlanta flight.

Personally, I prefer overnight flights as it gives me a chance to get some sleep as well. Maybe even watch a movie as I enjoy my meal of rubbery poultry and sneak in a glass of white wine.

Plus, trying to fill an entire 13-hour flight with fun but quiet activities is challenging.

By the end of one particularly long, sleep-free flight from Vancouver to Hong Kong I wanted to crawl into the aisle and let the flight attendants run me over with the drink cart to put me out of my misery.

MORE: A guerrilla approach to flying with kids 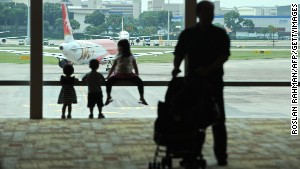 No point waiting around. When the early boarding announcement hits the air waves, run for that gate.

“We now invite passengers with small children to begin boarding at this time.”

When you hear these magic words, grab the kids and make a break for it.

Sure, boarding first means even more time confined in close quarters with your darlings.

But having a few extra minutes to get the kids settled as they fight over the window seat, and actually finding a space in the overhead compartment for your carry-on luggage right above your seat, are reward enough.

5. Bulkhead seats aren’t for everyone

There’s no denying the bulkhead seats are awesome. More leg room for you and extra space for toys is always a good thing on a flight with kids.

If you’re flying with a baby, it’s also one of the few spots on the plane where the airline’s bassinets can be set up. These need to be requested in advance but are highly recommended if your baby weighs under 25 pounds and you’re flying for more than five hours.

But remember, the armrests don’t usually lift up in bulk-head seats as they have to store the tray tables.

Not ideal if you are on a night flight and trying to get a two-year-old to sleep comfortably, which usually means lifting the armrest and spending a few hours with a pair of cute little legs stretched across your lap. 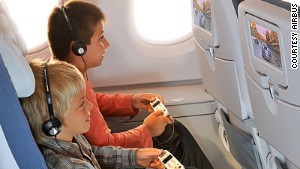 The in-flight entertainment system is your best friend on a flight.

Remember what I said about junk food?

The same thing applies to electronics.

Now is not the time to adhere to your “no more than 30 minutes of TV a day” rule.

The in-flight entertainment system is your best friend on a flight. Hours of kids’ movies and TV shows.

If you’ve got an iPhone or an iPad, load it up with new kid-friendly apps your children have never tried before you fly.

It’s also wise to buy some proper headphones that will fit on your kids’ heads.

MORE: How young is too young to travel? 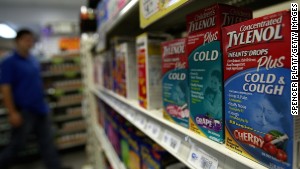 Thinking of hitting up a pharmacy before your flight? That shot of Benedryl could backfire.

7. The drugs don’t work (for everyone)

The first response from child-free people upon hearing you’re flying overseas with your kids?

As much as we all fantasize about enjoying a silent flight punctuated only by the light snores of heavily tranquilized children, bear in mind that shot of Benedryl you slipped little Jane before takeoff could backfire.

It’s wise to know the effects the medicine will have on her before your flight, as antihistamines can make some children hyper.

You obviously don’t want your three-year-old hopped up on cold meds, crooning the “Little Einstein” theme at the top of her lungs for 10 hours.

Also worth bearing in mind, in some parenting circles drugging your kids is considered tantamount to child abuse.

8. The element of surprise

Along with the snacks, games and other meltdown prevention essentials you’ve packed — their favorite blanket is a must — it’s wise to throw in a few surprises.

Now that my boys are older I’ve stopped doing this but when they were around three and less enamored with their gadgets I found it useful to buy a few little treats to reveal mid-flight, which would occupy them for a few precious moments.

Meanwhile, if you let your kids pack their own bags of travel toys, you’d be wise to check what’s going in there.

My four-year-old son once slipped a plastic water pistol into his carry-on suitcase before the flight and sobbed in devastation — “But it’s not reeeeeeaaaaal!” — as he watched an unsympathetic airport security agent chuck it into a garbage bin.

Most people get it. Kids are kids and some noise is expected.

But it really is the parent’s job to make sure their child is occupied and not driving everyone insane.

Nobody is going to sympathize with the dude who lets his/her kid run wild around the plane shrieking or kicking the backs of people’s seats while opening and closing the meal tray on a 12-hour cross-Pacific flight.

Before any journey, I find it helps to remind kids what will happen and what’s expected of them.

Especially the part about having to sit down and wear their seat belt when the light’s on.

If a child is over three, they’ll usually understand. And if they don’t, a stern word from the flight attendant will likely scare them straight.

Want to earn bonus points? Follow this dad’s lead and hand out candies and ear plugs to your fellow travelers.

When that plane finally pulls up to the gate after a long night of telling yourself “this too shall pass,” there’s nothing quite like hearing a departing passenger utter those tear-jerking words of validation: “Wow, your kids were really well-behaved.”

And if they weren’t?

You did your best.