SAN ANTONIO — The takeoff began from 15 feet out, a web of forearms and torsos cluttering his path. Manu Ginobili darted past Udonis Haslem, through Ray Allen, planted his right foot outside the semicircle and launched himself toward the rafters, taking flight once more on those old legs.

How many times had the Spurs themselves wondered if their time was up, only to defy expectations, defy age, defy gravity once more?

With the NBA Finals hanging in the balance Sunday night, and history in reach, Ginobili powered through Allen’s forearm and launched himself over Chris Bosh, unleashing a dunk so fierce that it may have rattled that rack of Larry O’Brien trophies on the plaza level.

Shocking, because Ginobili will soon celebrate his 37th birthday. Shocking, because one year ago this week, Ginobili looked finished—his legs shot, his spirit deflated after a miserable Finals performance against the Miami Heat.

They all looked shot and deflated then, after the heartbreak of Game 6 and the concession in Game 7. This proud Spurs dynasty had grown old and frail. Its time had run out.

If we had not learned the lesson then, we surely have now: These Spurs are ageless, timeless, refusing to abide by any known laws of physics.

So Ginobili gritted his teeth and flushed that dunk over Bosh on Sunday night, then followed with a three-pointer, and soon the Spurs were pulling away for another stunning rout of the Heat, 104-87, and, at long last, another NBA championship.

Fifteen years after Tim Duncan and David Robinson lifted the Spurs to their first title, another Duncan-led lineup guided San Antonio to its fifth, with a stunningly lopsided 4-1 victory over LeBron James and the star-powered Miami Heat.

“The sweetest one,” said Tony Parker, who joined Ginobili and Duncan for the last four championships.

Duncan has his fifth ring, tying him with Kobe Bryant for the most by any star in the post-Michael Jordan era and burnishing his case as the greatest power forward ever.

Gregg Popovich has his fifth, tying him with Pat Riley and John Kundla for third all time.

Parker and Ginobili have four apiece, guaranteeing their place one day in Springfield, Massachusetts.

The Spurs were the first team to win a championship after the breakup of the Bulls. All these years later, they are still the class of the league, with a dramatically different formula.

Since Duncan’s first title, the entire NBA power structure has changed, many times over. The East has sent nine franchises to the Finals in the last 15 years, powers rising and falling before we even learn the name of their backup centers.

The Spurs endure. They outlast, outthink, outmaneuver. They are the envy of the league—the most admired, the most copied, the most poached. Spurs alumni now populate staff directories in Oklahoma City and Orlando, Salt Lake City and Philadelphia, Atlanta and New Orleans. 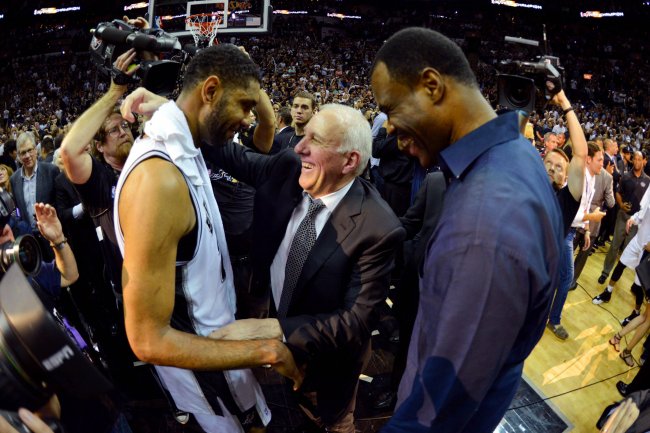 David Robinson was among a handful of past Spurs who joined the team in celebrating its fifth NBA title since 1999.

This title is about so much more than any one player, or their tough-love coach, or the emergence of Kawhi Leonard, who won the Most Valuable Player award after averaging 17.8 points and 6.4 rebounds in the Finals, while guarding James on nearly every possession.

This title is about the endurance of the Spurs way—a culture, a values system that connects the 1999 title to those earned in 2003, 2005, 2007 and 2014. The Spurs’ media guide was embossed with the word “Family,” which sounds trite until you look around the arena.

Robinson was there Sunday night, lurking in a locker room hallway while the Spurs doused each other with Dom Perignon and Bud Light. Sean Elliott and Avery Johnson, starters on that ’99 team, were in the house, as was George Gervin, the star of the Spurs’ ABA era.

Past and present mixed easily, gratefully.

There, in images and emotions, was the Spurs’ culture brought to life. It starts with owner Peter Holt and extends through the front office, from R.C. Buford (the NBA’s reigning Executive of the Year) and Popovich (the reigning Coach of the Year).

Robinson added, “What they’ve done here is just off the charts.”

If the Spurs exemplify selflessness and team play, this 2014 title team might be the Spursiest team ever.

They are still built around Duncan, Ginobili and Parker, all of whom are bound for the Hall of Fame. But Duncan, at 38, is no longer a dominating, low-post power. Ginobili has lost some of his famed shiftiness.

This team won the championship because of Leonard’s quiet audacity, Boris Diaw’s clever passing and the three-point marksmanship of Danny Green and Patty Mills.

“I think everybody participated in this one,” Bowen said. “So that’s what made them so hard to defend—that it wasn’t about one or two guys. It was more about four or five.” 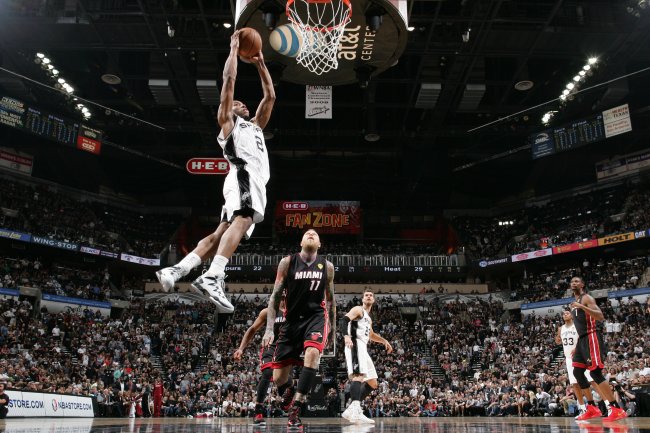 Duncan is the only lottery pick on the roster, and he was picked 17 years ago. Parker was a late first-rounder, Ginobili a second-rounder. Green and Mills were second-round picks who were waived by their original teams and spent time in the D-League. Diaw was waived by the Charlotte Bobcats, at the time the worst team in the NBA.

Yet these Spurs just thoroughly dismantled a Heat team led by three top-five picks, one of whom happens to be the greatest player of his generation. The Spurs outscored the Heat by 70 points in the series, the most lopsided Finals in history.

The Spurs were deeper, smarter, more committed to the cause. They outpassed the Heat and outclassed them.

“Pop came in with a vision,” Buford said, “and I think it fit the culture of our city. It fit David Robinson and Avery and Sean, who began this journey. … I think the players that have come—Steve Kerr and Danny Ferry, the list goes on and on, Bruce and Michael Finley and Brent Barry—they set a standard. Not only a performance standard but for relationships. And I think our ownership has allowed us to continue to be together.

This might not have been the most talented of the Spurs’ five title teams—it’s hard to compete against Duncan-Parker-Ginobili in their prime—but it was probably the deepest. Everyone contributed. Everyone was a threat. The ball kept moving, swiftly, purposefully, finding the open man.

As commissioner Adam Silver said in the trophy ceremony, “You showed the world how beautiful this game is.”

Ginobili provoked the biggest in-game roar, for that stunning second-quarter dunk. Duncan got the loudest ovation when he checked out. Leonard got the MVP chants.

So brilliantly did the Spurs play this series, they almost look like they could go on forever.

“They want to play until they die,” Holt said. “I mean that somewhat sincerely, actually.” 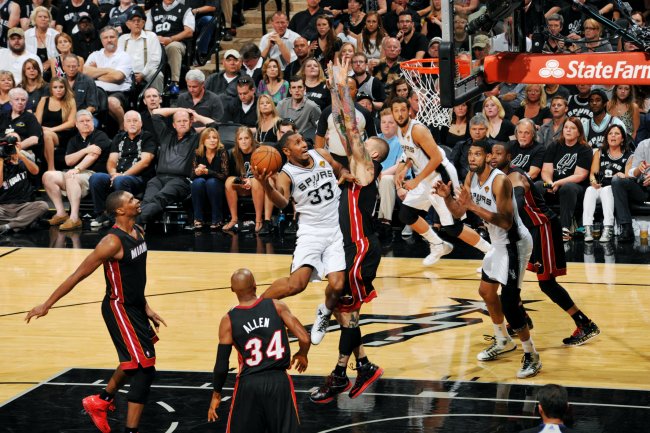 Once cut by the Charlotte Bobcats, Boris Diaw led both Finals teams in assists and was outrebounded by only Tim Duncan for the series.

Spurs officials, like the players they employ, are a modest lot, not prone to self-promotion. They generally deflect praise with a single, self-deprecating throwaway line: “We just try not to [bleep] it up.”

For 15 years, they have not bleeped it up; rather, they’ve continually reimagined, reinvented and discovered hidden gems, whether in the draft or the D-League.

Holt declared this the most rewarding of the five championships, because of what the Spurs endured last year, and because the glory had seemingly ended long ago, with that 2007 title.

Holt wore a satisfied smile and a shiny brass belt buckle with “Spurs” engraved across it and four basketballs lining the bottom—one for each of his four championships.

“They can put the fifth one right in the middle,” Holt said.

The engraver might want to leave a little room, just in case.