The 2015 American Music Awards show aired last night on ABS with today’s pop music on full blast. Jennifer Lopez, the evening’s host, started things off with a energetic performance. But she didn’t sing, she danced! J-Lo, instead of belting out one of her pop songs made the wise choice of performing a full on dance number in a skin-thgith body suit to many of today’s top pop songs on the charts. She and her dance troop sizzled all over the stage to songs by Justin Bieber, Drake, Nikki Minaj, the Weeknd, and many more.

Prince made an appearance to present the first award for best R&B Album. The Weeknd was speechless as he approached the stage to receive the award, finally saying “Make some noise for Prince, ladies and gentlemen,”.

Other evening highlights were Demi Lovato giving a strong performance of her new song “Confidence”, Arianna Grande performed her new hit “Focus”, Celine Dion performed a tribute to the victims of the Paris attacks by performing Edith Piaf’s “Hymne à L’Amour” while stock footage of Paris played behind her. It felt a bit heavy handed. 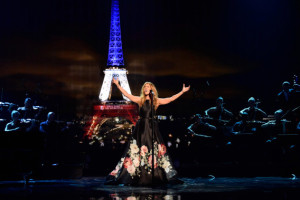 Meghan Trainor and Charlie Puth’s performance got additional attention after the singers made out onstage after singing their song, “Marvin Gaye,” which features the lyrics: “Let’s Marvin Gaye and get it on.”

The highlight of the night was Pentatonix performing a Star Wars Tribute. Harrison Ford introduced the a Capella group as they shared the stage with a 75-piece orchestra to praise John Williams. Harrison discussed Williams’ contributions to the movie world, including the theme songs to “Jaws,” “E.T.” and, of course, “Star Wars.”

The Microsoft theatre stood still, without a peep from the audience as a new clip from “The Force Awakens” aired live during the show. Penatonix harmonized to a melody of the “Star Wars” score.