The “Menopause The Musical- Survivor’s Tour” is currently working it’s way across the US, spreading a comedic joy on the topic of menopause with humor and wit. The tour, due to stop in Central Florida on Nov 10th (Melbourne- King Center), and 12th (Clermont-Clermont Performing Arts Center), takes the audiences through the symptoms and issues of menopause. “Our main hope is that women leave the show feeling empowered” says cast member Terri Adams. “We want them to know that your best years are not behind you when you enter menopause, and that there are’s a lot of life ahead of you. There are a lot of great things ahead.”

What to men think of the show? “Sometimes they come kicking and screaming after being dragged to the show” says Adams. “and sometimes they come as willing and supporting participants. Even though they may not smile as the show starts, by the end of the show they all have a blast. It’s kind of a men’s guide to menopause and what their spouses are going through.” 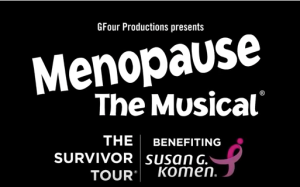 Proceeds from each show go to Susan B Komen for the Cure to help with the ongoing battle against breast cancer. They also sell merchandise, some of it hilarious like the ‘hot flash fan’, and proceeds also go to the foundation.

The cast is approached after the shows and Adams says many feel the show gives them a much needed laugh. “I’ve had women who I can see are battling breast cancer come up and join us in the kick line at the end of the show!”