Was this a track meet or a football game? The Baylor University Bears dominated on the ground at the 2015 Russell Athletic Bowl, beating the North Carolina Tar Heels 49-38. The Bears came into this game without some major weapons. They lost their Heismen contending starting QB Seth Russell early in the season as well as No 2 QB Jarrett Stidham. They also lost No 1 running back Shock Linwood and Belitnikoff Award winner WR Corey Coleman) . Baylor managed to rush for 645 yards, breaking the all-time college bowl record. Game MVP Johnny Jefferson rushed for a Russell Athletic Bowl record with 299 yards for Baylor 8 yards short of the all-time bowl record. This gave him 1,000 yards for the year. Jefferson and WR Terrance Williams scored a Russell Athletic Bowl record 3 touchdowns each. Baylor RB’s Jefferson and Devin Chafin broke an all-time college bowl co-team player record with 460 combined rushing yards. 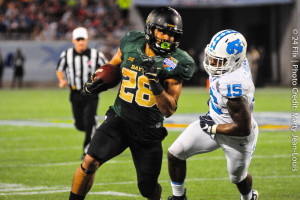 North Carolina’s 38 points is nothing to sneeze at, but was no match for the no-huddle speed and spread offense of Baylor. Carolina QB Marquise Williams numbers were strong: 22-36 for 243 yards and 1 interception. Plus an additional 81 net yards rushing. Baylor  LB Aiavion Edwards led the defense 17 tackles, 2 of them sacks. UNC’s Donnie Miles had 22 tackles. 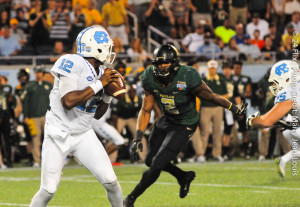 The amazing fact of the game is that Baylor was using multiple substitute quarterbacks as their first and second string QB’s have been injured. The Bears used the wildcat formation for a good part of the game. Baylor saw the gaps in the UNC running defense, they pounded the ball and were able run up and down the field, almost scoring at will. 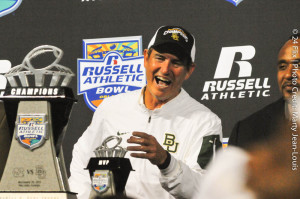 Baylor comes out with a 10 win season after this game (10-3), continuing the winning trend in Baylor football. North Carolina ended the season with a 11-3 record.