The Orlando Magic have been on a two game tear after being humiliated by the Cleveland Cavaliers recently. The Magic dominated the Charlotte Hornets last night at the Amway Center, 113-98. On Star Wars Night, the Magic truly felt “The Force”. 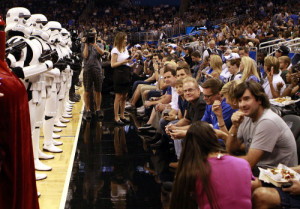 “We’re just playing together and sharing the ball. It’s much more fun when we play that way and we’re a better team when we play like that and we know it,’’ Magic center Nic Vucevic said. “If we want to be a really good team, we have to play this way. … There were just a lot of plays tonight that you can pick out where we made the extra pass and we were really unselfish. It’s great to see and it’s great to play like that.’’

The Magic’s next game of this extended homestead is Friday December 18 against the Portland Trailblazers.