It’s all over the sports news sites and stations. It’s trending on Twitter. Giants 12 year head coach Tom Coughlin has told ownership that he will resign.

“I informed them that it is in the best interest of the organization that I step down as head coach,” Coughlin said in a statement. “I strongly believe the time is right for me and my family, and as I said, the Giants organization. “It has been an honor and a privilege to serve as head coach of the New York Football Giants,” he added.

Coughlin won two Super Bowls during his Giants tenure. He took over and immediately instilled a code of discipline, drawing criticism of star players such as Hall of Famer Michael Strahan. He was determined to not only make the roster better players, but better men, better husbands, and better fathers.

The Giants struggled with a 6-10 record this year, a year where the NCF eastern conference was very weak and seemed to be up for grabs. Some players feel that Coughlin didn’t let the team down, but his players let him down. 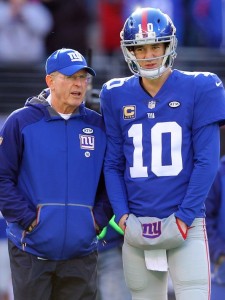 An emotional Ely Manning fought tears as he discussed his coach earlier today. “He definitely has not failed these players,” Manning said of Coughlin. “We failed him.”

Still yet to be announced is the status of the Giants GM Jerry Reese or any of the other 2015 staff.