This was a dramatic football weekend, and a pitiful football weekend. From a game that included miracle after miracle, to a blowout, to business as usual, this division championship weekend was one to remember. 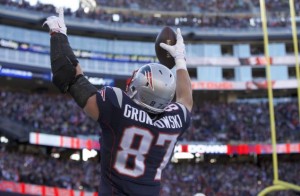 As always, against the New England Patriots, the rule is that you have to score touchdowns, not field goals. Otherwise they will run you out of the building. This is basically what happened.

For the first two touchdowns scored by the Patriots, the Chiefs scored field goals. By the second half, the Chiefs woke up and started getting into the end zone, but if you can’t stop the Pats, it’s too late. Well, it was too late. Business as usual.

The Carolina Panthers have been a force tis year. After suffering only one loss this season, the Panthers were jumping at the bit to prove themselves once again. Unfortunately, Seattle was the next victim.

Caroline running back James Stewart, coming off of a foot injury recovery, opened things up with a 59-yard run on the games opening play. Stewart scored two touchdowns, Cam Newton threw for one, and fellow All-Pro Luke Kuechly ran in an early interception for a score as Carolina built a 31-0 advantage.  This was only the first half.

The second half was a different story. Please remember that the Panthers were playing the Seattle Seahawks, a team known for miracle plays and fantastic comebacks. The Hawks managed to do just that, but came up 7 points short.

Do You Believe In Miracles? How About Two!? Arizona 26, Green Bay 20

This game left all of the commentators speechless at the end. Green Bay had a 13-10 lead at the end of the 3rd quarter. The Arizona offense comes to life with 10 points in the 4th quarter. Things look dim for Green Bay at :55 in the 4th when they find themselves on their own 4 yard line, 4th and 20 after a 10 yard sack. Green Bay quarterback Aaron Rodgers takes the snap, scrambles in the end zone and heaves a 60 yard pass to Jeff Janis for a first down on the Arizona 36 yd line.

After a couple of incomplete passes and a 5 yd penalty, the Packers find themselves with 2nd and 15 at the Arizona 41 with :05 left in the 4th quarter.

Rodgers takes the snap in the shotgun formation, drifts to the left, and heaves up a hail marry pass to the end zone. Packers receiver Jeff Janis beats two Arizona defenders for a mind boggling touchdown. Green Bay makes the extra point as the game goes to Overtime.

Overtime was basically 4 plays: Kickoff is a touchback, a 75 yard pass to Arizona’s Larry Fitzgerald, an incomplete fade to Fitzgerald, and then a shovel pass to Fitzgerald for a Touchdown and the win. This game was a stunner. 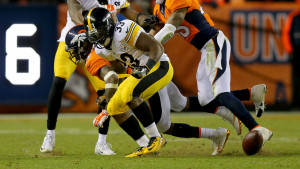 Pittsburgh’s field general Ben Rothlisberger was playing with a wounded wing. Peyton Manning is fading and though healthy, is no where near his previous days of glory.  Play ball!

This game went as expected: Low scoring, lots of field goals. Pretty much neck and neck through to the fourth quarter. Pittsburgh was up 16-15 when Pittsburgh RB Fitzgerald Troussant fumbles and it is recovered by Denver’s DeMarcus Ware on the Denver 35.

The Broncos drive the ball down the field for a touchdown and get a 2 point conversion for a 23-16 lead, basically sealing the victory.

This sets up yet another Peyton Manning – Tom Brady match up for the AFC Championship, while the Arizona Cardinals travel to face the Carolina Panthers.