Orlando Magic forward Aaron Gordon impressed this Saturday night at the NBA All Star dunk contest. Gordon made it to the finals with powerful and spectacular dunk after dunk. In the Finals, he faced last years winner Zack LaVine from the Minnesota Timberwolves.

The two proceeded to provide what is looked at as the best slam dunk contest ever. Each dunk was athletic, acrobatic, and powerful, and dunk after dunk not only brought the fans screaming to their feet, but received a perfect score. Judges Ervin “Magic” Johnson, Shaquille O’Neal, Tracy McGrady, Dekembe Mutombo, and George Gervin even ran out of room on their score cards as Gordon and Levine hit perfect score after perfect score.

Gordon’s best dunk included the Magic’s mascot ‘Stuff’ holding the ball over his head, Gordon running up and jumping above him, grabbing the ball, and while flying in the air in a seated position, passed the ball under his legs and dunking it into the basket with two hands. 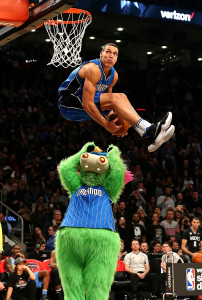 LaVine finally sealed the deal after Gordon did a spectacular dunk that included him raising the ball over his head, then below his knees, and then reverse dunking it with two hands. But Gordon only received a 47 score, with McGrady, Mutombo, and Gervin only giving him 9’s. (Maybe some revenge on the Magic from McGrady?)

The announcers and even LaVine said that the contest should have been declared a tie, but to no avail. Gordon was a gracious loser and congratulated LaVine in the win. But now everyone who watched knows who Aaron Gordon is.