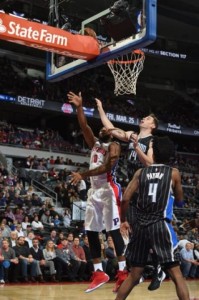 **EDITOR’S NOTE: At the time of this posting, the Magic were about to face the Miami Heat. The Magic lost their 6th straight game to the Heat, 108-97.

The Orlando Magic are on the tail end of their season. This season’s number one goal was to make the playoffs, and the team has come up short. The key reasons: Inexperience and inconsistency. The boys in blue show what they can do in flashes but that’s the problem, it was in flashes.

The porous defense that the Magic played this year was at times embarrassing. Coach Scott Skyles, a coach known for his team’s tough defenses, ran out of answers once the team decided mentally that they didn’t have to do that work to win, and that’s when the losses began to build up.

The Magic face the Miami Heat tonight in Miami and try to avoid their fifth straight loss. Magic guard Elfrid Payton gave an aggressive performance in the last game against Detroit, delivering a triple double, but when the game got towards the end of the third quarter, former Magic forward Tobias Harris drilled a 3-point jumper that ended a Magic surge and seemed to take them out of the game. The Magic lost 118-102 to a Piston’s team that they have the talent to beat.

The Magic have definitely improved over last season with the current 29-42 record, plus the much improved performances of Aaron Gordon, Victor Oladipo, and others, but the result is an early trip home yet again. Many times they needed a “go-to guy”, that superstar to raise his level of play and take the clutch shots when the game was on the line.

10 games until the end of the season after tonight. Let’s see if they have anything left in their emotional tank. The Magic face the heat tonight in Miami, 7 pm.