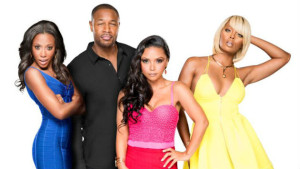 Jenna’s roommate and best friend Kelly (Megan Holder), an image brand consultant/publicist, is known equally for her success and bad taste in men, whom she is constantly trying to rescue and unfortunately effect her career.

Then there is Tara (Eva Marcille), who occupies the couch rent-free. She wants to be famous and will stop at nothing to get there- -except get a real job. She’s more interested in finding her net conquest to take care of her and also take care of her bills.

Fate would have it, the seemingly perfect man moves in comes, Jenna’s new fine-as-wine neighbor Donovan (Tank). Single, successful and interested. So how long will Jenna be able to keep her vows?

Tonight’s season finale episode, titled “The Funeral Kiss”,  Has us following Kelly as she deals with family issues and an Aunt Velma’s unusual funeral requests, Jenna (Danielle Nicolet) tries to use Velma’s funeral to take her relationship with Donovan (Tank) to the next level; Meanwhile, Tara (Eva Marcille) prepares for a zombie apocalypse detective role that could lead to a big move.

Be sure to tune in to TVOne tonight to check the season Finale of Born Again Virgin out!