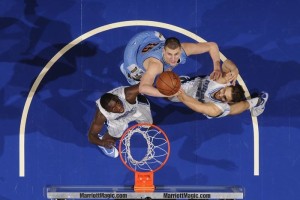 The Orlando Magic came home after a west coast trip and check in with a solid in over the Denver Nuggets, 116-100.

The Magic, who have been holding on to playoff berth hopes, but losing key games, came home after a week with losses to Phoenix, Golden State, the LA Lakers, and the Portland. Some of these games, especially the Suns and Lakers, are to teams with dismal records that the Magic should have beaten.

But reality is here and we have roughly 20 games left. Deflated fans got a lift from last night’s game, where Evan Fournier scored 30 points, Aaron Gordon continued to deliver a solid performance with some spectacular dunks, and Victor Oladipo had good production to take down Denver. Forward Jason Smith tied his career high with 25 points.

Key to the win was the Magic’s solid play on defense. It wasn’t the smothering defense that the team wants to be known for, but it was effective enough to keep Denver at bay.

The Magic have the send half of a back to back tonight when they visit the Charlotte Hornets.