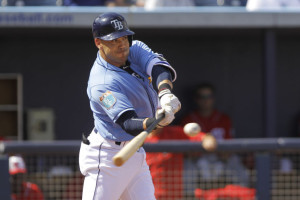 The game was hyped up on ESPN, after all it was history. The Tampa Bay Rays were honored to be the first baseball team to make an appearance in Cuba since 1999. After the Rays beat the Cuban National Team 4-1 in Havana’s Estadio Latinoamericano, discussions about what the trip meant were all over the media.

ESPN’s Dan Le Batard spoke for his parents and many Cuban exiles, expressing the pain and torture that the still current regime in Cuba put his family through. He did a great job in expressing the community’s hurt in seeing our president shaking hands and sitting with Raul Castro during the trip, to the point of being reduced to tears after seeing a protester arrested after interrupting ESPN’s Bob Lee’s live report from Havana. 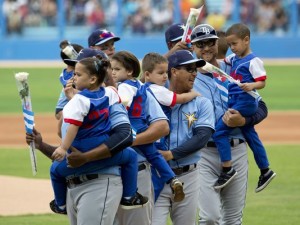 But to the Rays, the team players consider themselves baseball ambassadors.

“Hopefully us going there was a political statement for their leaders,” Rays ace Chris Archer said “Hopefully it opens their leaders’ eyes to what is possible for their nation. Not from a sports perspective, but if they choose to change their ways what can be afforded to their country.” 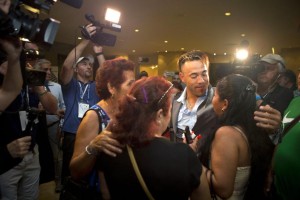 One of the most touching moments of the visit was the reunion of Cuban-born outfielder Dayron Varona, who was included on their 34-player travel roster and got to return home for the first time since leaving on a boat with his mother in 2013 to start his pro career. Archer, Evan Longoria and others lobbied team officials to include him. Manager Kevin Cash said that spoke volumes.

The outfielder reunited with his young niece, sister and other family members in the hotel lobby when he arrived on Sunday.

As for baseball, James Loney homered and drove in three runs, and Matt Moore and the Tampa Bay pitchers shut out the Cubans until Rudy Reyes homered in the ninth inning.

President Obama attended the game and sat withand his family and Raul Castro . He spoke with ESPN’s coverage team and teased former Yankee Derek Jeter about his golf game.

Obama thanked ESPN and other sports media for the way they covered the historic baseball game in its broader context. “Ultimately, what this game’s about is goodwill and the recognition that people are people, but we can’t forget that there are some larger stakes involved in this,” he said.

The Rays being their 2016 Season on April 3rd against the Toronto Blue Jays at  tropicana Field in St Petersburg, FL.