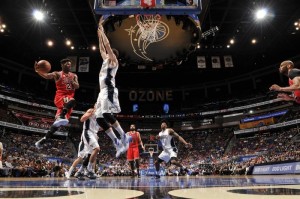 The Orlando Magic obliterated the Chicago Bulls 111-89 at the Amway Center today. The win ends the Magic’s six game losing streak and takes the team up to 30 wins for the first time since 2012.

The Bulls were losing right from the start and Orlando eventually built a 29 point lead at one point. Orlando whipped the Bulls (36-36 and losers of three straight) for a second time in March to win the season series, 2-1. The Bulls came into the game well-rested and just two games back of the No. 8 playoff seed in the East, but on this night they were easily outclassed by a sharper and hungrier Magic squad.

But a career-best 18 from Dewayne Dedmon, 15 points from red-hot Elfrid Payton, as well as solid performances from power forward Jason Smith (14 points), Evan Fournier (12 points), Andrew Nicholson (14 points) and Devyn Marble (eight points and seven rebounds) proved too much for the uninspired Bulls.

Orlando ended the first half with a strong 18 point lead. The Bulls came back strong to start the third quarter and came within 9 points, but the Magic took over momentum with an 11-4 run.

Payton demolished Rose and the Bulls from the start. He made his first four shots and six of seven at the half for 13 points early on. And he was even more effective passing the ball, handing out seven assists in the first 24 minutes of the game.

The Magic next face the Brooklyn Nets in Brooklyn, NY on Tuesday night, 7 pm.