The USA Women’s Soccer team started their first contest in the SheBelieves Cup tournament with a 1-0 win over England last night at Raymond James Stadium in Tampa, FL. The tournament is a round robin of games between the national women’s teams of the USA, England, Germany and France. In the opener last night, Germany scored a last minute goal to defeat France 1-0.

Conceived and developed by USWNT players, #SheBelieves is a campaign to inspire and encourage young women and girls to accomplish their goals and dreams, athletic and otherwise. Launched in the weeks before the 2015 Women’s World Cup, the campaign has continually reached new heights by positively impacting communities around the country and expanding to produce the SheBelieves Cup – the marquee women’s friendly tournament on the international soccer calendar. 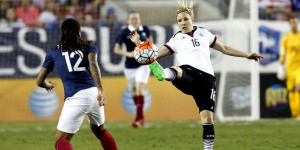 The U.S. Women’s National Team defeated England 1-0 on a spectacular second-half goal from Crystal Dunn. Germany’s Leonie Miler scored after France failed to clear a corner kick and a few deflections is the penalty box gave her a clean shot towards the end of the match.

Tampa drew and attendance of 13,027. The SheBelieves Cup next travels to Nashville, TN on March 6, and Boca Raton, FL on March 9.