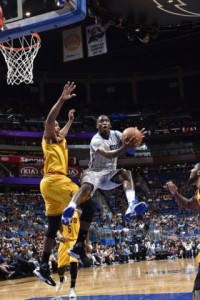 The mood in the Amway center was different than most games vs the Cleveland Cavaliers. Yes, the Orlando Magic lost yet again last year’s Eastern Conference champs 109-103, but the Magic played the Cav’s tough through most of the game.

Magic star Victor Oladipo scored a career high 45 points and was dominant on offense and a pest on defense. Grant it, the Cavs have been struggling recently. They are still trying to work out their team chemistry and rumors of guard Kyrie Erving being unhappy in the team offense has caused some unwanted stress from fans and the media, but the boys in blue (well, gray on Friday) made sure that this was not another easy win for the boys from Ohio.

“I just wanted to come out and set a tone because, honestly, that team has been punking us the last couple of games, and we wanted to set a tone that we weren’t here to get punked,’’ said Oladipo, referring to Cleveland’s 26.4-point average margin of victory in the three meetings prior to Friday. “We came to compete. We did a good job of that, but we’ve got to tighten up some loose ends, especially in the fourth quarter.’’

The Magic led by 11 early on and took an 86-83 lead into the fourth period. They managed to keep LaBron to a pedestrian 18 points, and were in contention well into the 4th quarter, but an old face emerged to take the win for Cleveland. Channing Frye, traded to Cleveland less than a month ago, drilled key 3-point shots to give the Cav’s enough space to close. Frye and Tristian Thompson seemed to take over on the last 5 minutes of the 4th quarter. With Nic Vucevic out, Thompson was able to exploit the Magic’s vulnerability on the inside all night with a strong rebounding game.

The Magic next play Toronto on Sunday March 20th in the Air Canada Center in Toronto, 4pm game time.