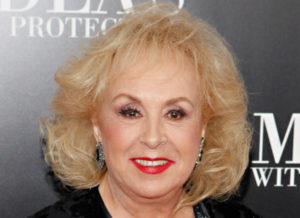 Doris Roberts, the lovable and meddling mother from the hit Television show “Everybody Loves Raymond” has passed away according to her representatives. She passed away on Sunday at the age of 90.

The 5 time Emmy award winner was a favorite on the show, with clever quips and perfect comedic timing. Roberts won Emmys for best supporting actress in a comedy for playing Marie Barone, the mother of Ray Romano’s sportswriter character, in 2001, 2002, 2003 and 2005.

Her reps say that she died of natural causes.

“Truly the end of an era,” Patrica Heaton, who did battle with Roberts as daughter-in-law Debra on the show, wrote on Twitter. “My wonderful TV mother-in-law and ELR nemesis Doris Roberts was a consummate professional from whom I learned so much. She was funny and tough and loved life, living it to the fullest.”

“Doris Roberts had an energy and a spirit that amazed me,” Romano said in a statement. “She never stopped. Whether working professionally or with her many charities, or just nurturing and mentoring a green young comic trying to make it as an actor, she did everything with such a grand love for life and people.”