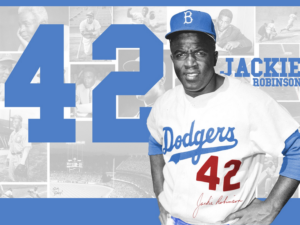 This year marks the 71st anniversary of Jackie Robinson signing his professional contract with the Brooklyn Dodgers organization in 1945, which was the first step toward his eventual breaking of the color barrier on April 15, 1947. As has been tradition each April 15th since 2009, MLB will celebrate Jackie Robinson Day with all players and on-field personnel wearing Number ’42’ during that day’s games.