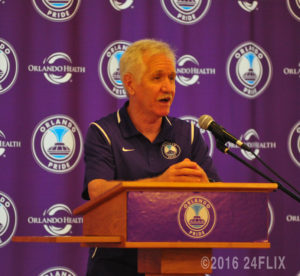 The Orlando Pride, Orlando’s brand new professional women’s soccer team in the NWSL, have been hard at work. Making appearances, building team chemistry, getting to know each other as a team, and setting up for life in Central Florida.

At the teams media day this week, the team revealed their team kits and shared their thoughts with the media about the 2016 inaugural season. The Pride, lead by USA Women’s soccer standout Alex Morgan, have built up the excitement of Central Florida soccer fans for months now, and we’re almost at go time. 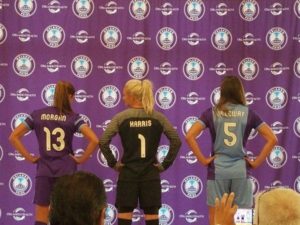 The Pride Players displayed the team’s home, away, and goalie kits to the press. Purple, light blue, and black will rule the pitch in Orlando Pride matches this year.

Orlando coach Tom Sermanni expressed his confidence in this group and is looking forward to working with them further. They’ve spent the past few weeks getting to know each other, their skills, their strengths and weaknesses and how they all fit together. 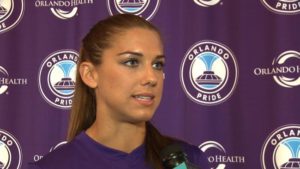 Morgan missed most of the Pride’s preseason because of national team duty. She also suffered a a hip injury early in camp, which limited her ability to be on the field with her teammates during the time she actually spent in camp. But coach Sermanni said that she is fit to play.

“She’s fit, healthy, and ready to go,” Sermanni told the assembled media. “She will be starting on Sunday. Whether she plays the full 90 minutes or not, that will all depend on quite a few factors. But at this moment of time, she’s playing and will be playing significant minutes.”

Morgan has been the center of attention since she and other USA Woman’s team players expressed their frustration about not being fair compensation compared to the USA Men’s team, thought they have been far more successful.

She will be the center of attention on Sunday’s season opener in Portland as it will be her first match facing her former team, the Portland Thorns since being traded to Orlando in October.

Morgan, one of several former Thorn Players, said she’s ready for the challenge on Sunday, and knows just how hard it is to play in a tough environment in Portland not just as a visiting player, but even as a player on the home side.

“I think it helps because I know that environment super well,” she said. “And we know that it’s hard for Portland to play in Portland. It’s a lot of pressure for them to play in front of their fans, and the expectations that the club sets for their players.”

Look out for the Orlando Pride’s opening day in the Citrus Bowl against the Houston Dash on Saturday April 23 at 7:30. The Pride hope to “Fill The Bowl With Pride” and break the MLS Women’s attendance record of 21,144. #FILLEDWITHPRIDE