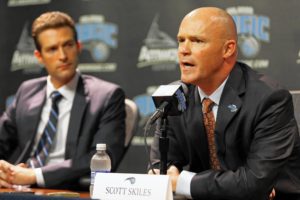 Orlando Magic coach Scott Skiles has resigned from is position. He released a prepared statement:

“After much thought and careful consideration, I and I alone, have come to the conclusion that I am not the right head coach for this team. Therefore, effective immediately, I resign my position as head coach of the Orlando Magic. I realize this type of decision can cause much speculation. The reality though is in the first sentence. It is simple and true. Any other rumors are pure conjecture.”

Skiles had some issues with the direction of the team and had clashes with team General Manager Rob Hennigan, including weather Elfrid Payton is the Magic’s point guard the future.

The Magic had a 35-47 record in the 2015-16 season, Skiles only season as head coach. After a strong start to the season with a 19-13 record, the team fell to a 2-12 record in the month of January. The team never recovered. The team showed a softness and lack of experience repeatedly during the rest of the season.

Smiles did not join the team’s delegation Wednesday to Chicago to interview draft prospects. Hennigan is en route back from Chicago and will hold a press conference.