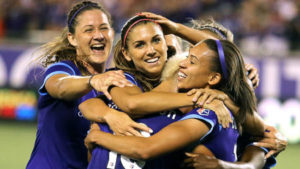 The Orlando Pride soccer club defeated the Western New York Flash 1-0 at Camp World Stadium last night. The Pride remain undefeated at home this season. After many opportunities in the Orlando penalty box, including an open goal opportunity in the second half, the Pride Defense held all night, and managed to create  an opening for team captain Alex Morgan to score the match’s lone goal.

Morgan, Ashlyn Harris and Becky Edwards helped lead the Flash to the 2011 Women’s Professional Soccer championship, while Edwards, Kristen Edmonds, Jasmyne Spencer, Toni Pressley and Jamia Fields all competed for the Rochester, NY Flash during the NWSL era. You would think that this would give them an edge in the match but the Dash can almost considered an expansion team with mostly first and second year players and new coach Paul Riley.

The Flash have had only 1 home game so far this season and are not used to artificial turf.

Orlando’s Ashlyn Harris NWSL has been had the Save of the week for three weeks running for the Pride, although she’d rather have less shots on goal instead. 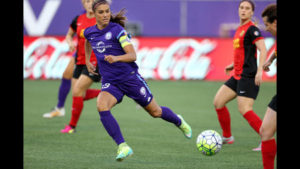 Though a lot of the action happened on Orlando’s defensive side of the pitch, it was obvious that the team has established a rhythm and has gained confidence in their sets. Orlando Forward Jasmine Spencer continues impress with her speed and she repeatedly outran Flash defenders to the ball. 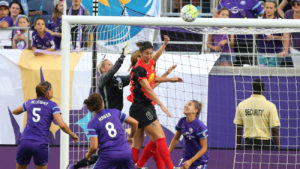 After one scrum in front of the Orlando net, Flash forward Lynn Williams had the Flash’s best scoring chance 26 minutes in, after midfielder Samantha Mewis muscled past Edmonds and sent a ball into the middle, finding her teammate with an open net. Williams, however, was unable to find the netting, blasting her shot off the crossbar from just six-yards out.

The Pride now head out on their longest road trip of the season, playing its next four matches away from home.