It’s been a magical season for the Golden State Warriors: Beating the 1995 Chicago Bulls record with a 73-9 regular season record, Steph Curry being the first unanimously voted MVP, several miracle comebacks this season, and now, after being down 3-1 in the 2016 NBA Western Conference finals, the Warriors take out the Oklahoma City Thunder in 7 games, Last night  96-88.

The Thunder had their chance to take down Steph Curry and the Warriors in game 6 of the series when they were up 3 games to 2 in the series and had the lead against the Warriors within 8 minutes of the end to the 4th quarter. The Thunder committed crucial turnovers that lost them the game, 108-101.

Observers are puzzled as the Thunder started the series on fire, taking down the champs at home, 108-102, where they have a 39-2 record. In game two, The Warriors fought back and defeated the Thunder after another Stef Curry miracle performance, 118-91. Curry scored 15 points in 1 minute 58 seconds in the 3rd quarter. Curry left the court with a grin and a shrug after dominating yet another team as they had done all season. 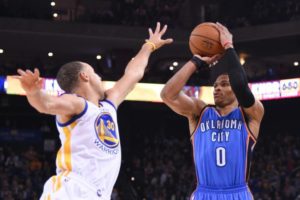 That seemed to wake up OKC. They truly dominated games three and four in Oklahoma City, stunning the Warriors and the NBA by beating the warriors by a combined 52 points over the two games. (133-105, and 118-94) The Warriors got spanked. The Thunder clamped down on down on defense, with Curry finding his 3-pointers contested and his passing and dribbling lanes clogged by quick-footed defenders with long arms. With Curry unable to break free, and with little support from Golden State’s usually reliable and deep cast, they were dominated. It was the first time in over a year that the Warriors had lost back-to-back games. Oklahoma City led the series 3-1.

Game 5 was a dizzying battle with many missed opportunities on both sides. The Warriors came out battling and leading the game with it’s first 3-point shot by Harrison Barnes at the beginning of the first quarter, but the Thunder kept it close. at halftime, the Warriors had a 58-50 lead. 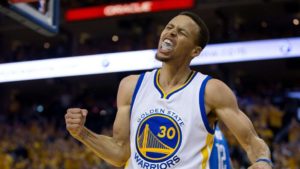 The Warriors, as they usually do, got unpredictable contributions (power forward Marreese Speights scored 9 points in the second quarter, more than his per-game average), spun the offense around center Andrew Bogut (15 points, 14 rebounds) and got the biggest lifts from Curry. They took game 5 at home in Oracle Arena, 120-111. 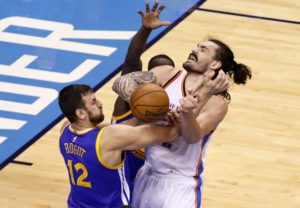 The thunder were confident that they would take game 6 at home, but fell apart in the final minutes of the games mentioned above, falling to Golden State, 108-101.

And finally, the Warriors turned up their defensive heat and returned to their 3-point domination and won the series, 96-88, setting up a rematch with the dominant LaBron James and his HEALTHY Cleveland Cavaliers.

Game on is Thursday June, 2 in Oakland, Ca
.