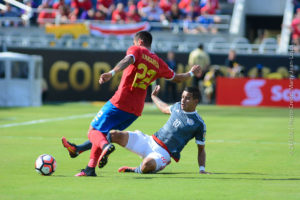 It a hot, humid day on Orlando Florida where field temperatures reached 102 degrees. The Costa Rican National team and the Paraguayan National team battled to a 0-0 draw in match #2 of the Copa America Centenario.

Both teams are considered underdogs in Group A of the tournament, where the top two teams, Colombia vs Teams USA faced each other in match #1 in Levi’s Stadium in Santa Clara, Ca. Colombia took that match 2-0. 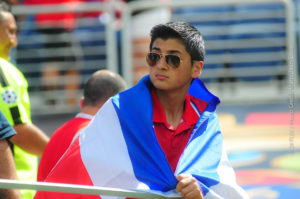 Costa Rica was playing without their solid goalkeeper Keylor Nava who was down to an chillies injury and considered one of the best in the game. However goalie Patrick Pemberton proved more than adequate manning the net.

The teams seemed evenly matched and the match was very paced and cautious as both teams seemed to struggle getting shots on goal. As with many of these contest there was quite a bit of acting going on, with players that were barely touched facing to the ground and pretending to writhe in pain. 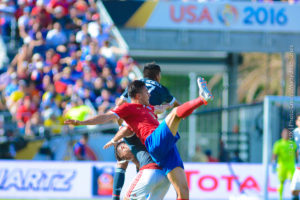 in the 76 min , Paraguay’s Gustavo Gomez landed on his back on the deck after contesting a header. His team got the ball and streaked the length of the field only to be tripped up before getting a shot on goal. Play stopped as Gonzalez needed medical attention. 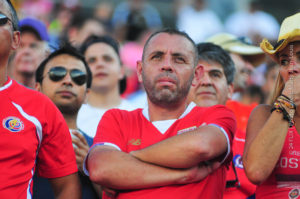 The crowd of 14334 seemed to look for something exciting to cheer for, but were forced into a ball management, highly defensive match this afternoon. the game had a total of 5 shots on goal.

Both coaches were pleased with their team’s performances. Paraguay coach Martin Loustau was happy with his teams ball management and defense. “Wall that was missing was a goal” he stated in the post -game press conference. Both coaches also expressed the difficulty to compete due to the heat on the field.