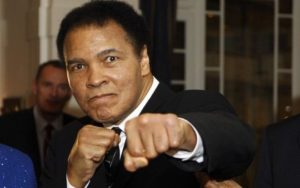 Boxing Great, icon, activist Muhammad Ali died yesterday at age 74. Ali died due to respiratory issues caused by Parkinson’s disease in a Phoenix hospital. He had been battling the disease for three decades.

The three time World Heavyweight Champion boxer, was known for his charm and humor and spouting poetry that made fun of not only his opponents but favorite targets such as ABC’s Howard Cosell.

Ali was a magnetic figure, beloved in all corners of the world, from the Philippines, where he fought Joe Frazier in the “Thrilla in Manila” to Africa, where he fought George Foreman in the “Rumble in the Jungle,” to Miami Beach, where he trained at the 5th Street Gym and won the first of his three titles in 1964, thrusting his gloves in the air and shouting, “I shook up the world!”

Ali won an Olympic gold medal in the 1960 Olympic games in Rome, only to return to Louisville, KY and face the racial discrimination. He said that he threw the medal in the Ohio river. 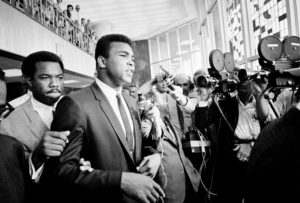 Ali, birth name  Cassius Marcellus Clay Jr. , caused an uproar in the 60’s by converting to Islam and joining the Nation of Islam. He wanted to be known as Cassius X at first, but soon after changed his name ti Muhammad Ali. Most of the press refused to refer to Ali by his new name.

When two black contenders, Floyd Patterson and Ernie Terrell, insisted on calling him Cassius Clay, Ali taunted them in the ring as he delivered savage beatings.

He often spoke the ministry’s rhetoric, uplifting black people and challenging the white establishment. He was despised by many Americans in the mid-1960s for refusing to be drafted into military service for the Vietnam War. His statement “I ain’t got nothin’ against them Vietcong” caused headlines and angered many in the country.

On April 28, 1967, Ali refused to be drafted and requested conscientious-objector status. He was immediately stripped of his title by boxing commissions around the country. Several months later he was convicted of draft evasion, a verdict he appealed. He did not fight again until he was almost 29, losing three and a half years of his athletic prime. 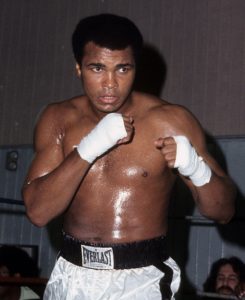 As Ali’s draft-evasion case made its way to the United States Supreme Court, he returned to the ring on Oct. 26, 1970. He went on to classic fights agains Joe Frazier, George Foreman, and Larry Holmes.

In retirement, he dedicated himself to humanitarian causes, world peace, the Muhammad Ali Parkinson Research Center in Phoenix and the Muhammad Ali Center in Louisville. Ali raised over $100 million for parkinson disease research. The Muhammad Ali Childhood Home Museum – the renovated house where he grew up – opened last month.