In remembrance on one of the greatest icons in the world, Muhammad Ali, passing yesterday, we decided o research and present some of his famous and provocative quotes. 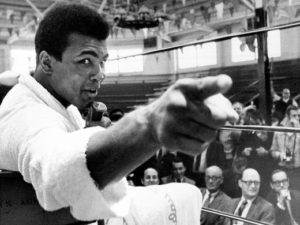 “Float like a butterfly, sting like a bee. His hands can’t hit what his eyes can’t see. Now you see me, now you don’t. George thinks he will, but I know he won’t.”

“Service to others is the rent you pay for your room here on earth.”

“If my mind can conceive it, and my heart can believe it—then I can achieve it.” Jesse Jackson said this as early as 1983, according to the Associated Press, and Ali used it in his 2004 book.

“It isn’t the mountains ahead to climb that wear you out; it’s the pebble in your shoe.”

“If you even dream of beating me you’d better wake up and apologize.”

“Joe Frazier is so ugly that when he cries, the tears turn around and go down the back of his head,”

“Braggin’ is when a person says something and can’t do it. I do what I say.”

“I am the greatest, I said that even before I knew I was.”

“I’ve wrestled with alligators. I’ve tussled with a whale. I done handcuffed lightning. And throw thunder in jail.”

“Only a man who knows what it is like to be defeated can reach down to the bottom of his soul and come up with the extra ounce of power it takes to win when the match is even.” 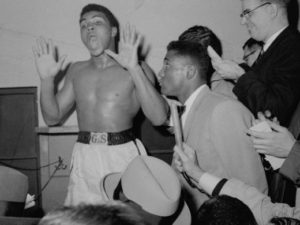 “I should be a postage stamp. That’s the only way I’ll ever get licked.”

“If they can make penicillin out of moldy bread, they can sure make something out of you.”

“How tall are you? So I can know in advance how far to step back when you fall down!”

Live everyday as if it were your last because someday you’re going to be right.”