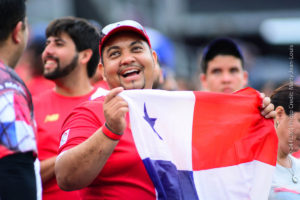 There were three opponents in last night Copa America Cenenario last night in Orlando: Panama. Bolivia, and Tropical storm Colin. As Panama emerged as the victor, 2-1, but Bolivia and Colin all had battled in this game. As for Colin, it provided high winds and torrential rain before the match plus stifling 87% humidity through the match. Colin provided a repeat performance at the beginning of the second half with another windy downpour. 13,000+ fans endured the weather to cheer on their national teams.

Both teams are a part of Copa America’s Group D that also include world No.1 Argentina and No 5 Chile. Panama faces Argentina Friday at Soldier Field in Chicago, and No. 82 Bolivia will challenge Chile at Gillette Stadium in Massachusetts.

The teams prevailed over the weather. Panama was aggressive in the beginning of each half, living up to its higher FIFA ranking (Ranks: Panama No 56 Bolivia No 87), even though this was it’s Copa debut. They were quicker, beating Bolivia in nearly every one-on-one battle and holding their shape much better than their opponent. Bolivia, who was recently dismantled by the US team in a friendly 4-0, battled to keep Panama at bay. 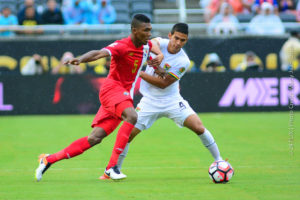 Panama broke through, however, in the 11th minute with a sliding kick by Blas Perez for Panama’s first Copa goal in history (assist by Miguel Perez Ortega). The goal happened after three of four presses in the Bolivian side of the pitch.

The match was a physical one, with 8 yellow cards distributed, as well as the side Referee’s having to come onto the field to help break up skirmishes more than once. The heat and rain helped raise tempers and frustration.

Key substitutions in the second half strengthened Bolivia’s stance and intensified the contest. Bolivia was able to do some damage in this contest as well, tying the contest 1-1 with Juan Carlos Arce blasting a goal in the 54th minute in the second half, exciting fans as this was now a contest. 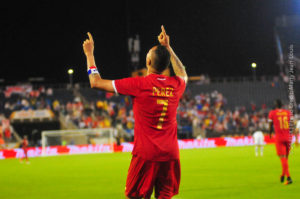 But Panama’s Blas Perez returned fire towards the end of the match with a goal in the 87th minute, thanks to an assist again by Miguel Perez Ortega. Bolivia did not have time to counter.

“We had the desire to win,” Panama coach Hernán Darío Gómez said through a translator after the match. “We had the desire of satisfying the country, so the team was trying to do as much as it could in the last minutes to get the result. Everybody wanted to cry, and everybody was hugging each other. We were feeling our country and our jerseys, and we were very happy. The pride and the honor and the three points are wonderful.”

“I’m very happy for the happiness of all Panamanians, and the boys were singing for each of the goals that we made like we were champions of the world.”

“After second goal, we worked harder. That’s a habit that we have. Other teams gets the next goal we work harder. This time we had little time to make it up.” Said Bolivia coach Julio César Valdivieso, who also thought that his team was technically superior.

But the country of Panama celebrates as their team, Los Canaleros, made them proud in their Copa debut.