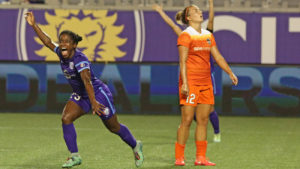 The Orlando Pride, battled all match against the Houston Dash, and pulled out a win in the final minute of stoppage time to win, 1-0, continuing their home unbeaten streak. The hero Thursday night was Jasmine Spencer sho kicked in the game winning goal set up perfectly by Sarah Hagen. it was Spencer’s first goal of the season.

“It was great to see [Jasmyne] get her first goal. She’s worked really hard for it so I was really, really delighted for her,” said Orlando Pride Head Coach Tom Sermanni. 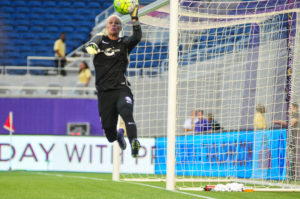 Spencer entered the match in the second half, and got the Pride streaking in the offensive direction after the Dash hit Pride goalie Ashlyn harris with a flurry of shots which she deftly blocked and held goal.

Pride captain Alex Morgan got open late in the second half, running out of gas after taking a shot that was blocked. The heat and humidity definitely took its toll on both teams despite the regulated water breaks.

The Pride win breaks a 3-game winning streak and the team capitalized on their key players being with them before the Olympics take many players away. including goalie Ashlyn Harris and team captain Alex Morgan who both leave for the US national team after Sunday’s game vs the Portland Timbers.

The Pride (5-5-0, 15 points) remain unbeaten from the comforts of Camping World Stadium, with a 4-0-0 record in Orlando and outscoring opponents 7-1 in those matches.