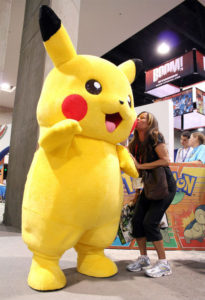 After the Pokemon Go game became the craze of 2016 phone gamers, smaller micro businesses have sprung up offering unique services for the game, just in time for those who want in on the craze, but don’t have the time.

Ads have popped up in cities across the country offering services, such as Pokemon training and boosting where for $20, a Craig’s lister will “level up” your Pokemon account, and even hatch “eggs” in the game for you. Some are trying to cash in on this craze as they are overeducated and underemployed and trying to make a few extra bucks, Plus they remember collecting the Pokemon cards as a kid.

“The service I’m trying to offer is, well, simple: sit in Central Park in New York for a user and catch all the Pokémons that I come by,” said Tommy Zhang, 26, a tech entrepreneur in Manhattan who collected Pokémon cards and stickers as a child. A “level 24 trainer,” he posted a Craigslist ad, “Professional Pokemon Trainer for Hire,” to earn a few bucks after his start-up ran out of funds.

Mobility is a big plus in Pokémon Go, with high-value targets scattered at landmarks around the city. So Steven Astudillo, 20, a part-time Uber driver who lives in the Bronx, moonlights as a Pokémon chauffeur, since players are not supposed to drive and stare at smartphones at the same time.

“We’re leveling the playing field for people who don’t have the time but are interested to play competitively, or at least hang in their neighborhood,”

For many of these Poké-pros, it’s hard to say where business goes from here, if anywhere. One trainer, Ivy St. Ive, who was profiled in Gothamist, quickly retired after friends informed her that she was at risk of being banned from the game for violating its terms of service, which state that players agree to never use another user’s account.