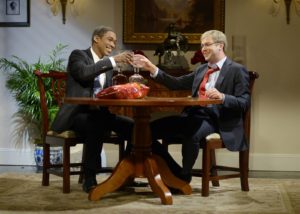 Saturday Night Live favorites Jay Pharaoh and Taran Killam will to be returning to Saturday night live in the fall for the show’s 42nd season. Both actors, who are known for their impressions, were on the show for six seasons.

No reason was given for producer Lorne Michaels not renewing their contracts. Both were let go before the end of their seven-year contracts.

Pharoah, 28, and Killam, 34, are known for their celebrity impersonations: Pharoah for his Barack Obama, Will Smith, and Jay-Z, and Killam for his Matthew McConaughey and Brad Pitt, among many others. A fan-created website, SNLArchives.net, lists 95 impressions and 15 characters in Killam’s repertoire — making him the most versatile current cast member.

“I don’t know fully why” said Killam “I was never given a reason why, really.”

“It’s always hard and sad to say goodbye, but it feels like an appropriate time and I am so, so grateful to have been a cast member,” he added.