The Orlando City Soccer Club faced the New England Revolution last night at Camping World Stadium in Orlando in a game that had playoff implications. The boys in purple came through with an awesome performance and took down the Revolution 3-1.

New England, with a 5-7-6 record is in 6th place in the MLS Eastern Conference standings, with Orlando right behind them in 7th place. Orlando was only 3 points behind, and the win tonight put Orlando in 6th, as they would lead by points and record comparison.

This was also Orlando’s first MLS game under new coach Jason Kreis’s tenure and we a have a stadium full of Orlando City fans anxious to see if life had been breathed into their beloved team. 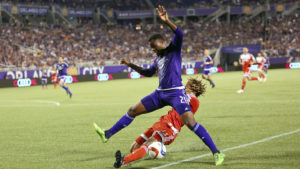 After watching the first half, the Lions seemed to force sharper passes and moved more aggressive towards the ball. They attacked the New England players on defense and tried to take advantage of opportunities on offense. The struggles on defense were less than before and seemed like there were fewer mistakes.

After a strong first half, even though the Lions made a major mistake and letting Revolution forward Kei Kamara break loose for a goal from midfield, it seemed that Kries said the right words to the Orlando squad at half time.

“I’m obviously very, very happy. I think the week of work that the players and staff have put in was excellent. One of the best weeks I’ve ever been involved with. To see that work culminate in a really strong performance makes me extremely happy,” Head Coach Jason Kreis said. “It’s really rewarding as a coach to be working on something and spending a lot of energy to try and convey that message to the players to see it start to take shape in the game.”

Orlando came out in the second half and dominated. They played with confidence and high energy, something that’s been missing here for months. Within a minute of the second half,  forward Kevin Molino and Cyle Larin dribbled a bit on one two passes, freeing Larin to rip a cross shot past goalie Bobby Shuttleworth for a 1-1 tie. The 27,768 in attendance erupted, as if they had been waiting for this kind of play for a long time. 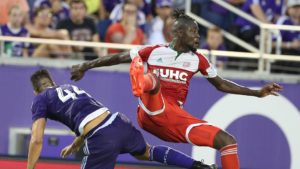 The Lions were not finished. In the 65th minute, Breck Shea rifled a shot from the New England back line towards the goal and forward Kevin Molino perfectly angled a header for a goal, taking the score to 2-1. This was turning out to be Molino’s night.

Once again, Molino got a chance to shine. In the 83rd minute after a dominant sequence of passes between Molino, Kaká and Boden, Kaká found Molino running into the box. Molina ripped  a shot past Shuttleworth for his second goal of the match. Orlando 3 New England 1.

Kreis made several changes to the lineup in his first game as head coach, something former coachAdrian Heath was reluctant to do. Kreis put MLS All-Stars Kaká and Cyle Larin at forward and Hadji Barry, Kevin Molino, Servando Carrasco and Antonio Nocerino at midfield in his 4-4-2 formation. Brek Shea came on for Barry, who made his third consecutive start, at halftime. Shea provided a boost of energy in the second half that proved contagious.

Things are looking bright for Orlando City SC in the near future. Their next opponent, the Settle Sounders on August 7th, whose head coach of 8 years Sigi Schmid agreed to mutually part ways with the team, is now in a coaching transition. Next up the Chicago Fire, who sit in last place in the MLS Eastern conference. These are two opportunities for the Lions to improve their record and playoff standing.