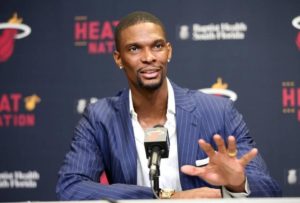 Miami Heat forward Chris Bosh’s comeback has hit a road block. According to the Miami Herald, the complication involved evidence of some continued clotting and is believed to be related to one of two previous blood clot episodes. Those episodes sidelined Bosh after the All-Star break each of the past two seasons.

The complication is not considered life-threatening, however doctors do not recommend that he play with the condition. Heat medical staff discovered a clot that travelled from his leg to his lung in February 2015 and another clod was discovered in his calf this past February.
Blood clots are gel-like clumps of blood that can be dangerous, potentially life-threatening if not treated quickly with blood thinners or anti-coagulants. There is a risk of playing sports while on blood thinners, because of the potential for bleeding if a player is cut.
The Heat had gone into this week expecting to clear Bosh to resume his career this season, according to multiple sources briefed on the situation. But his clearance by the Heat always was contingent on Bosh passing his physical and no issues surfacing during a battery of Heat-administered medical tests this week.
Though it’s unclear if Bosh will attempt to play again, he is not expected to file a grievance with the union or push to return in the immediate future, amid this latest setback.
Tags
Chris Bosh miami heat NBA Pro Basketball