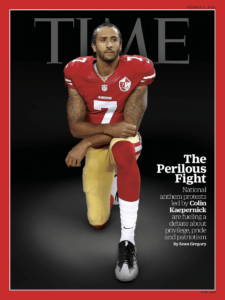 His stand has gone national. You’ve heard of the controversy with Colin Kaepernick, the San Fransisco 49ers QB who refused to stand during the national anthem in an NFL Pre-season game. Kaepernick remained seated to bring attention to the issue of black people being killed and brutalized by police officers around the country. Kaepernick has now made the cover of the October issue of Time Magazine.

He’s got kids as young as middle schoolers taking knees during the national anthem. He’s pledged to give $100,000 a month to community charities and has gotten people such as Seattle Seahawks cornerback Richard Sherman to walk out of news conferences due to frustration with how black people are treated by police. Retired NFL running back Marshawn Lynch made his point on national television, too.

The point of his protest has been successful: to get attention and begin discussions. At first, Kap was ridiculed as dishonoring the US military veterans and soldiers who fight for this country. Kaepernick stated that this ws not his intention and hundreds of active military and veterans have stated via social media and otherwise that they are not offended by his actions and stood firm with him. With recent incidents in Charlotte and Tulsa, the issue itself is beginning to receive more attention.

Kaepernick has even stated that has received death threats and is ready to die for this cause.

“To me, if something like that were to happen, you’ve proved my point and it’ll be loud and clear to everyone why it happened. And that would move this movement forward at a greater speed than what it is even now,” he said. 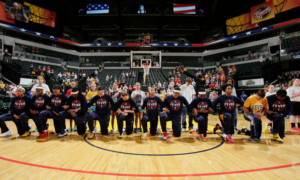 Now, we’re waiting to see what the NBA is going to do once its season starts in October. It’s a real concern for league commissioner Adam Silver. Silver is meeting with NBPA union executive director Michele Roberts to prepare for the coming NBA season and how to react to possible pre-game protests. Recently, the WNBA’s Indiana Fever players all kneeled during the national anthem, possible giving a look at possibilities of what to expect during the coming NBA season.