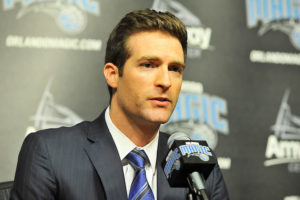 Destination: Playoffs! Orlando Magic GM Rob Hennigan was hard at work this offseason as he tried to remake the disappointing Magic roster. With a team of promising young players, the team was desperate for veteran leadership as well as a huge need to beef up the middle of the defense.

In a recent interview with the Orlando Sentinel, Hennigan talked about his expectations for this season.

“I think first and foremost our expectation is that we’ll cement an identity for ourselves as a smart, physical, unselfish, defensive-minded team. And we expect to make the playoffs.” he said.

He did’t give a specific team record, stating that it’s not really relevant at this point, But again stated “What’s important is getting into the playoffs.” 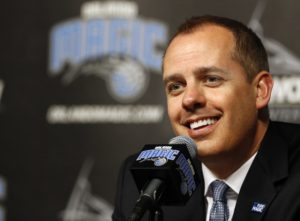 This is Hennigan’s fifth season as Magic GM, and his fourth since trading away Dwight Howard. The team has still shown little sign of recovering from that loss. The Magic did score this offseason. Needing yet another head coach, after losing coach Scott Skiles (sudden bomb dropping resignation), the Magic brass were able to snag former Indiana Pacers coach Frank Vogel. Vogel guided his squads in Indiana to two Eastern Conference finals appearances before being inexplicably fired. 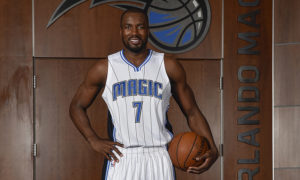 Hennigan had the guts pull the trigger on a draft night trade fan-favorite Victor Oladipo in a package deal to Oklahoma City for big man Serge Ibaka, providing depth to the Magic front line. Hennigan also added Bismarck Biyombo from Toronto via free agency, hoping a combination of Ibaka, Biyombo, and Nic Vucevic will solidify the Magic’s suspect interior.

Now, the team added new players Eric Green,  D.J. Augustin, Jodie Meeks and C.J. Wilcox to add shooting and add to the veteran presence it lacked for years. It just needs to develop a team chemistry.

“We’re thrilled to have Frank here with us. He’s a terrific coach, and he’s an adept motivator and communicator.” said Hennigan “The one thing I’ve noticed about Frank since he arrived is that he’s really good at understanding how to create an environment that’s conducive for success and togetherness. I think just his overall energy, enthusiasm and positive nature will have a big impact on our team, and I think our players are going to love playing for Frank. He just has a unique ability to instill belief and inspire guys. I think our team’s really going to respond to that approach.” 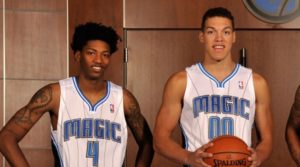 The Magic are looking to continue the growth of it”s young nucleus while fitting in the new talent. Orlando point guard Elfrid Peyton had a rough end of season last  summer, but is back and eager to get back at it after a great summer.

Magic second year guard Mario Hezonja had a great summer as well, playing well and training for the Olympic team of his native Croatia.

As for Magic high flying star Aaron Gordon? “Like all of our guys, Aaron had a great summer. He continues to improve seemingly on a daily basis, and I think a good goal for Aaron this season is to focus on playing confidently, consistently and within himself every night”

In this year’s Magic camp, competition is key. “We made it a priority this summer to ensure that we have competition at all positions across the board.” said Hennigan. “That will be the first time we’ve had that since this rebuilding began. We see that as a healthy dynamic and as something that will make all of our players better. I think if you ask the players, that’s how they want it to be: really having a competitive daily situation to earn minutes.”

Training camp starts next week, so we’ll get a good look at this new version of the Orlando Magic. Stay tuned!