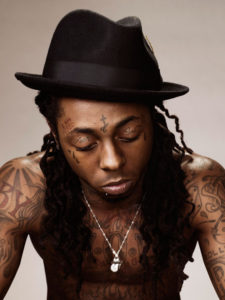 Lil Wayne was once called the Michael Jordan of Rap music, but that was before he went to jail.

The “gangster rap” style, with the drugs and women and guns finally caught up to Wayne Carter III, when he was sent to prison on gun charges on in 2010. March 8, 2010, the day Lil Wayne arrived at Rikers Island Correctional Facility, marks the end of his reign as the “Best Rapper Alive.”

But in the 242 days he spent locked up — a reduced sentence for good behavior — Lil Wayne entered a hell he’s never fully been able to escape. Part of him remains in that New York jail complex. “I’ve unfortunately seen a lot of spirits get broken in this hell hole,” he wrote on his last day at Rikers. “I don’t wish jail on anybody.” While behind bars, Lil Wayne handwrote daily journal entries that were recently published in Gone Till November in his original penmanship.

The prison memoir, while remarkable, is the only thing of note the New Orleans rapper has released on his own in 2016. Last year, Lil Wayne sued his record label, Cash Money Records, and its CEO, Bryan “Birdman” Williams, for $51 million. He wants out of his contract and believes he’s due money the label allegedly withheld from him for his anticipated 12th studio album, Tha Carter V.

Sift through Gone ’Til November’s 159 pages and you’ll meet an often perplexed Dwayne Michael Carter Jr., one who is afraid to rap in front of fellow inmates on the prison yard — afraid to be Lil Wayne.

Lil Wayne and Jay Z were certainly the titans of 2000s hip-hop. The common thread? Their ability as pure, natural wordsmiths. They both rarely write down their rhymes, instead channeling the verses from their brains into the microphone. But in prison, there are no mics. “The ultimate high is to know that my creativity can never be taken away from me by anyone or anything,” Lil Wayne says in his memoir. But in jail, his imagination was confined to a pen and paper, and his lyrical originality has suffered ever since. “[Prison] seemed to kill his spirit, his creativity and certainly his output,” crime author Hattie Collins recently said. “Perhaps he felt like he just didn’t have anything to say anymore – he said it all over that 2004-2006 period.”