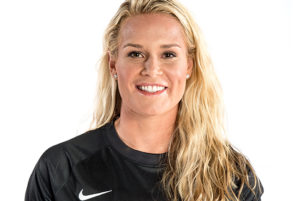 Harris, 30, becomes the first Pride player and first member of an expansion team to win a league award – as she finished the season with 62 saves while she posted a 1.33 goals-against-average (GAA) in 15 appearances for Orlando in 2016.

The Satellite Beach, Fla. native and U.S. international recorded four shutouts – tied for fifth most in the league – as she went 5-9-1 in net this season for the Pride.

The North Carolina product produced a highlight reel’s worth of stops this year as she won the NWSL Save of the Week award on eight occasions – the most in the league – including in Week 18 with a spectacular full-stretch save against Sky Blue FC as she got her gloves on to a header from SBFC forward Samantha Kerr to push the shot around the post.

Harris, who was acquired by the Pride with the No. 2 selection of the 2015 NWSL Expansion Draft, had a 0.756 save percentage this season as she faced 82 shots on goal – the third most in the league behind FC Kansas City goalkeeper Nicole Barnhart (102) and Houston Dash goalkeeper Lydia Williams (83).