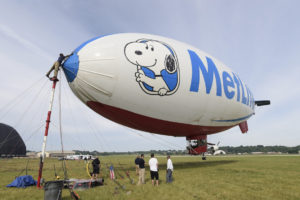 After 31 years as MetLife’s mascot, Snoopy is off to the pound.

Snoopy, Charlie Brown, and the rest of the “Peanuts” gang are out at MetLife, which has launched its first major marketing overhaul since the 1980s as it spins off more of its businesses to escape tougher government regulations.

MetLife, which has a $12 million annual licensing agreement, has been weighing the decision since at least June.

“We brought in Snoopy over 30 years ago to make our company more friendly and approachable during a time when insurance companies were seen as cold and distant,” Esther Lee, the company’s global chief marketing officer, said in a statement.

“We have great respect for these iconic characters. However, as we focus on our future, it’s important that we associate our brand directly with the work we do and the partnership we have with our customers,” Lee said.