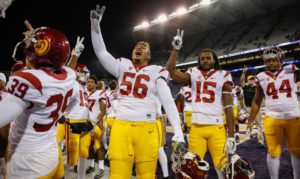 The announcement was made in Washington’s Husky Stadium and the sellout crowd at the Washington-USC game roared. Pittsburgh 43, Clemson 42. It is safe to say that never before has an ACC score made a Seattle crowd so excited.

Then Washington went out and lost, too. And Michigan followed up with a loss at Iowa and just like that there were three College Football Playoff-shaking results on a Saturday when all the top contenders were big favorites.

Chris Blewitt made a 48-yard field goal with six seconds left as Pittsburgh stunned No. 3 Clemson 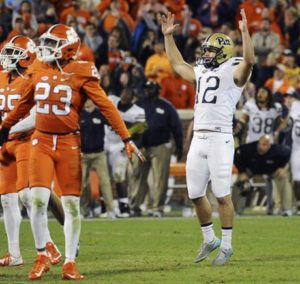 43-42, spoiling a record-setting Saturday for quarterback Deshaun Watson and complicating the Tigers’ path back to the College Football Playoff.
It was the biggest win for the Panthers (6-4, 3-3 Atlantic Coast Conference) since knocking off No. 2 West Virginia 13-9 in 2007.

Michigan (9-1, 6-1, No. 3 CFP) appeared to have the game wrapped up on Channing Stribling’s interception of Iowa quarterback C.J. Beathard with 1:54 left. But the Hawkeyes defense stuffed the Wolverines, and a facemask penalty put Iowa at Michigan’s 36 with 1:23 to go.

We all await the shake up of the college playoff rankings after these three stunning losses. Louisville (Defeated Wake Forest 44-12) and Ohio State (dominated Maryland 62-3) are sure to move up after 3 of the top 4 in the college football playoff rankings lost this week.

Here are the top 10 from the AP’s Top 25 College Football rankings: