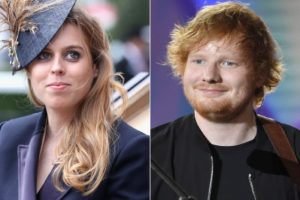 Princess Beatrice sliced open Ed Sheeran’s face with a sword while attempting to “knight” James Blunt as a party prank.

Sheeran, 25, was rushed to a hospital after Bea, 28, swung the ceremonial blade over her shoulder without realizing he was behind her.

He showed off the scar this week after the Windsor bash.

One source said: “He could’ve been blinded.’’

The royal had grabbed a sword after soldier-turned-singer Blunt, 42, joked that he would love to become a Sir.

But as she said, “Arise, Sir James,” she is believed to have misjudged the weight of the blade and had no idea Sheeran was standing right behind her.

Singer-songwriter Sheeran, at the party with girlfriend Cherry Seaborn, was taken to a hospital for treatment of a gash under his eye.

Beatrice was said to be “inconsolable.”

Sheeran, whose hits include “Bloodstream,” later returned to the party at the Royal Lodge in Windsor, home to Bea’s dad, Prince Andrew.