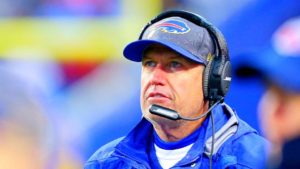 The Buffalo Bills have fired controversial coach Rex Ryan. Ryan, always quick with a witty word to the press, failed to produce in the football field..

The Bills announced the decision Tuesday along with their decision to fire Ryan’s twin brother, Rob, who was serving as the team’s assistant head coach/defense. Offensive coordinator Anthony Lynn was named the interim head coach for the final game of the year against the Jets. 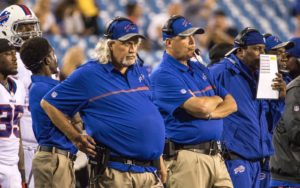 “I spoke with Rex earlier today and we mutually agreed that the time to part ways is now,” Bills owner Terry Pegula said in a statement. “These decisions are never easy. I want to take this opportunity to thank Rex for all his efforts and wish him all the best moving forward.”

Ryan was hired by Buffalo after his six seasons with the New York Jets, compiling a 46–50 mark before getting fired following a 4–12 record in 2014.

His teams also failed to make the playoffs in any of his last six seasons with the Jets and Bills.