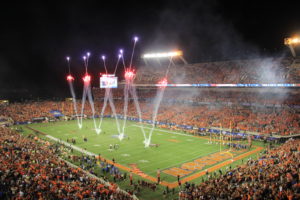 The Dr Pepper ACC Championship football game took place last night in Orlando, FL. The Game was moved from it’s planned Charlotte, North Carolina location by the NCAA due to the state’s refusal to adjust bathroom usage laws that many felt discriminated against the LGBT community. The game drew 50,628 fans.

Clemson now has 16 ACC titles to hold sole possession of the most ACC titles in conference history, breaking a tie with Florida State (15). 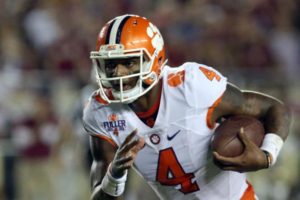 Watson started the game hot with a 9 play 75 yards drive taking only 3 minutes. He was 10 for 10 to start the game, and his first miss ended a streak of 19 straight complete passes, a school record. Clemson methodically drove down the field again, capping things off with a 21-yard touchdown strike to a wide-open Jordan Leggett.

On the next Virginia Tech drive, Clemson LB #6 Dorian O’Daniel was ejected from the game for targeting, helping Virginia Tech move down the field. The Hokies later reached into their bag of tricks and to avoid another 3 and out, called a fake punt that yielded a 20-yard pass  to Terell Edmunds to keep the drive alive. Virginia Tech on the same drive the tried a failed halfback pass that resulted in a pass interference call against Clemson. They went on to score a touchdown on a Travon McMillan 1 yard run.

“We felt good about it this week,” Virginia Tech coach Justin Fuente said of the Hokies’ trick play. “We knew we may need to do some things to like that in order to give ourselves a chance to extend a drive.”

Watson continued to dominate the Virginia Tech defense, driving Clemson 75 yards on 10 plays capped off with a laser-like throw to a streaking Leggett into the end zone to put the Tigers up 21-7.

The Hokie defense stiffened and began putting more pressure on Watson, making scoring much more difficult in the 2nd quarter.

Hokie QB Jerod Evans started heating up in the middle of the second quarter. The junior college transfer connected with Isaiah Ford for 53 yards to start the team’s fourth possession of the half. Three plays later, Evans worked his way through the Clemson defense for an 11-yard touchdown to cut the lead to 21-14 at the half. 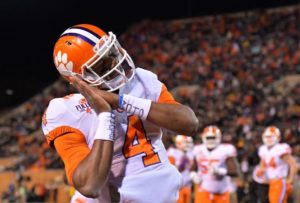 In the second half, Watson took over on Clemson’s second possession of the second half. The drive was capped with an 8-yard touchdown run by Wayne Gallman that extended the Tigers’ lead to 28-14.

Clemson capitalized on an Evans interception and drove 49 yards before Watson scrambled in for a 2-yard touchdown run. It extended the Tigers’ lead to 35-14.

Evans bounced back to lead Virginia Tech on back-to- back touchdown drives that cut the lead to 35-28 with 11:35 left in the game.

Clemson managed to score another touchdown, but Virginia Tech trimmed the lead even further with Cam Phillips’ 26-yard TD reception with just under 6 minutes remaining, making the score 42-35. 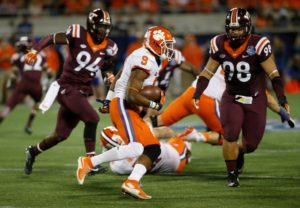 Virginia Tech got the ball back with a chance to force overtime. Evans drove his team to the Clemson 23, where the drive stalled when Tigers cornerback Cordrea Tankersley intercepted a pass on fourth-and-6.

“That was a special moment to celebrate with our team and just proud of them. That’s what championship football is all about.” Said Clemson Head Coach Dabo Swinney

“We started 124 days ago we had our rst team meet- ing, and we said in 124 days we want to be in the ACC Championship. We thought it was going to be in Charlotte at that time so we had a little detour.”

“Congratulations to Coach Swinney. Clemson, for winning the ACC championship. They’ve got a fine ball club. I’m awfully proud of our kids.” Said Virginia Tech Head Coach Justin Fuente. “I think our kids poured their heart and soul into this and are going to learn some life lessons from this endeavor but I’m awfully proud in the way they believed and the way they prepared and ultimately how they played.”

Clemson must now wait for Sunday’s playoff announcement to see what the future holds for the Tigers. Either way Swinney is proud of the accomplishments of his team.