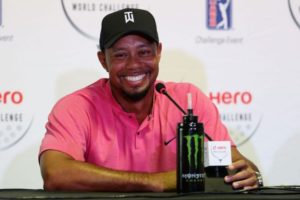 Tiger Woods returns to golf at the weeks Hero World challenge at the Albany Resort in the Bahamas. What’s ironic is how the timing worked out for his latest comeback attempt.

You see it was 7 years ago this past Sunday when Tiger crashed his Cadillac Escalade at his mansion, trying to escape his furious wife’s attack on him with a golf club. It led to the world discovering his multiple affairs, the end of his marriage, and effected his golf career, starting with mental lapses on the golf course followed by multiple back surgeries and a total collapse.

His competitive future was a question mark last December because his balky back made even a sedentary existence difficult.

“There was a lot of trepidation,” he said, adding, “Not being able to get out of bed, not being able to move, how can I expect to come out here and swing a golf club at 120 miles an hour?”

Woods, a 79-time PGA Tour winner who will turn 41 next month, played his last competitive round on Aug. 23, 2015, at the Wyndham Championship in Greensboro, N.C. He closed with a 70 to finish tied for 10th. He was scheduled to play in the opening event of the 2016-17 wraparound season last month in Northern California, but he withdrew a few days after committing to play, describing his game as “vulnerable.” 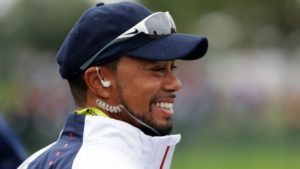 In his press conference for the Hero World Challenge this week, Woods stated that one thing he really missed the most was his camaraderie with the other players. “Yes, we’re on the course to beat each other, but off the course we hang out together and have dinners. We are friends.” Woods said.

“It was the text messages and the visits an the phone calls from these guys that really kept me up. Being part to the Davis Cup team and being around the guys really made me feel more comfortable and ready to go this week.”

So far in this week’s tournament Pro-am, Woods has hit two eagles. This may be a truly interesting event to watch.