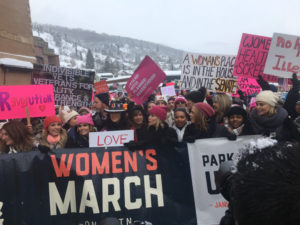 Protesters ambling down Main Street waved signs, banged drums and chanted the refrain of Bob Marley’s “Get Up, Stand Up” in the name of equality. 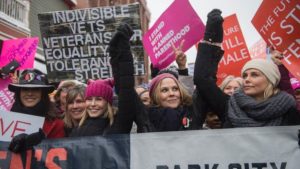 “This isn’t 1917 ― this is 2017,” Handler said in her speech. “We shouldn’t have to fight for progress we’ve already made, but we’re ready to. It’s our duty to take care of the next generation and to ensure that our children have the same access to the essential services that we all did.”

Meryl Streep was there in spirit: Festival director John Cooper was among many sporting “I’M WITH MERYL” stickers, and the crowd went wild when Bello said Streep’s political Golden Globe speech helped her out of her post-election stupor.

But for such a star-studded gathering, celebrities were hardly the morning’s highlight. There was a widespread sense of community as protesters huddled together, the Park City mountains providing a picturesque backdrop. Volunteers handed out bagels and miniature American flags. Strangers offered one another help through the slush and snow. Even a few dogs attended the event, including one wearing a sign that read “STRONGER TOGETHER.”