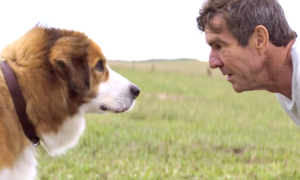 LOS ANGELES, Jan 29 (Variety.com) – Despite the TMZ videos and boycott threats, “A Dog’s Purpose” still managed to pull in family audiences, who apparently were not convinced of the significance of footage of a cowering German Shepherd being forced into rushing water.

The story of a dog who gets reincarnated, living through and playing “man’s best friend” to multiple masters, brought in $18.4 million in its opening weekend. That’s in line with the openings of other films for animal-lovers, such as “Eight Below” ($20.1 million) and “Dolphin Tale” ($19.1 million), neither one of which raised the ire of PETA. Universal and Amblin partnered on “A Dog’s Purpose.” It has a $22 million production budget.

Even at multiplexes where there were protests, such as the Arclight in Los Angeles, the film did strong business. It’s a solid opening, one that suggests that the companies were successful in containing the wave of bad publicity that threatened “A Dog’s Purpose’s” release.