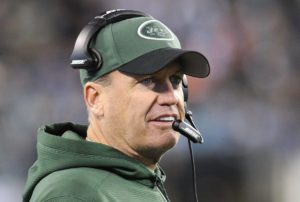 Rex Ryan, the outspoken former Jets and Bills coach, signed a one-day deal with ESPN to appear on “NFL Sunday Countdown” during the network’s Super bowl coverage, according to the Sports Business Journal.

Even though the contract is only for Sunday, ESPN could sign the outspoken Ryan to a longer pact if he chooses to stay on the small screen and not head back to the sidelines.

After being fired by the Bills in December, four networks, including CBS, ESPN, Fox and NFL Network, all expressed interest in bringing Ryan on board.

Ryan’s has always been known for his outrageous and humorous press conferences as head coach, so this seems like a perfect fit.

Part of Ryan’s schtick with the Jets was to guarantee a Super Bowl, but he never delivered. He cooled his jets after his promises failed to pan out, but he was back making bold statements in his introductory press conference with the Bills.

After two seasons, Buffalo fired Ryan with a year left on his contract.