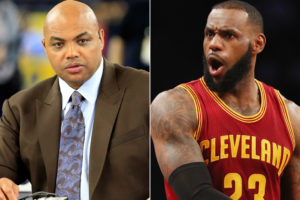 LeBron James has been a little testy lately. The Cleveland Cavaliers have been going through a rough patch, losing 7 of their last 11 games, including a loss to the Dallas Mavericks last night.

The Cavs (32-15) are in first place, but they are injured and thin. Kevin Love is sidelined for the fourth time in the past two months. J.R. Smith has been out for six weeks and isn’t anywhere close to returning from a broken thumb.

The Cavs are a big man and a point guard short, and James, 32, has to play both positions to make up for it. James was irked about the deficiencies on the roster before the injuries, and it’s only gotten worse. The fact that the Cavs have left a roster spot open for nearly a month puzzles him to no end.

Twice in the past two weeks he’s mentioned how the Warriors improved themselves by adding Kevin Durant in reference to where the Cavs are.

The Warriors (41-7) are awesome. Their firepower is incredible. They’ve only gotten stronger as the season has gone on.

Now comes criticism from one of the NBA’s most outspoken personalities. Charles Barkley. Barkley called them “inappropriate. Whiny. All of the above. The Cleveland Cavaliers, they have given him everything he wanted.” Typical Barkley.

James held nothing back in response, attacking Barkley’s past and present.

“He’s a hater … What makes what he says credible? Because he’s on TV?” James questioned. Then he went personal.

“I’m not going to let him disrespect my legacy like that. I’m not the one who threw somebody through a window. I never spit on a kid. I never had unpaid debt in Las Vegas. I never said, ‘I’m not a role model.’ I never showed up to All-Star Weekend on Sunday because I was in Vegas all weekend partying.”

“All I’ve done for my entire career is represent the NBA the right way. Fourteen years, never got in trouble. Respected the game. Print that.”

This was fodder for the giggling sports pundits all over TV and Radio who are looking for content to talk about on a usually quiet pre-Super Bowl week. LeBron finally went off!

We’ll keep watch to see where this road of King James’ frustration leads.