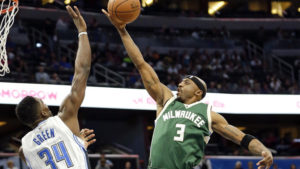 RLANDO – The Orlando Magic beat the Milwaukee Bucks 112-96 on one of their most consistent nights of play this season. This was also the day that the Magic honored former Magic player Anfernee “Penny” Hardaway.

The Magic (18-27) faced a Bucks team (20-22)with NBA standouts Jabari Parker and Yanis Antentokounmpo on the roster. The Bucks come off of a 3 game losing streak like the Magic, but pose a serious threat with these two emerging stars.

Orlando just returned home from a lackluster 12 game road trip (1-5)that featured inconsistent play and a lack of energy. They have lost their last three games, including a New Orleans blow the out on Wednesday 118-98 in New Orleans.

Orlando certainly had plenty of home support what with 19,307 fans – the second-largest crowd ever to see a regular-season game at the Amway Center – on hand. That crowd is second only to the 19,311 that saw the Magic face LeBron James and the Miami Heat back on Dec. 31, 2012. That record could fall in two days with the Magic about to host the high-powered Golden State Warriors in a noon start on Sunday.

The Magic, played without shooting guards Evan Fournier (bruised heel) and Jodie Meeks (sprained ligaments in thumb). It forced Vogel to turn to 10-year veteran C.J. Watson as a starter.

The Magic opened with uninspired and lackluster play once again. Milwaukee started the game with a 10-2 run.

Then Jeff Green entered the game. Green spoke out following Wednesday’s “embarrassing’’ loss in New Orleans about the team’s need to play with more passion. “This is a starting point. What happened on the road trip is in the past and it’s over with,’’ said Green, “We can’t do nothing about it and can’t think about it. We have to work from this game, move forward and bring the same effort on Sunday.’’

Magic managed to tie the game in the end of the first after the second unit of Green, Bismack Boyombo, Mario Hezonja, DJ Augustine, and Payton got in and went to work.

Another mixture of Green, Augustine, Biyombo, Watson, and Aaron Gordon seemed to keep Milwaukee at bay in the second with the Magic leading 48-34.

The Magic held on to a 59-55 half time lead Jabari Parker leading the first half scoring with 19 points. The Magic’s Elfred Payton lead the Magic with 11.

The Magic start the 2nd half with sloppiness. Payton getting the ball stolen while driving to the hoop followed by Nic Vucevic getting a traveling call, however Green and Biyombo had some spectacular shot blocks in the third.

At 8:36 in the fourth, both Payton and Gordon made key shots as well as a Jeff Green alley-oop courtesy of DJ Augustine. The Magic were up 100-93 in the middle of the 4th.

Milwaukee was limited to 40.5 percent shooting by Orlando’s aggressive play on the defensive end of the floor. Jabari Parker scored 25 points, but the Bucks had little else going. Antetokounmpo fouled out with 4:34 to play when Gordon stepped in front of him on a fast break drive, resulting in a charge.

The Magic shot 46 percent from the floor and handed out 25 assists – dramatically different play than last week when they saw too much one-on-one play. 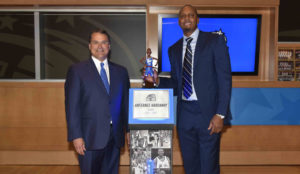 Prior to the game, the franchise inducted legendary point guard Anfernee “Penny’’ Hardaway into the Magic hall of Fame. Hardaway, a three-time All-NBA selection in his six seasons with the Magic, was also honored between the first and second quarters and given a rousing standing ovation by the fans at the Amway Center.

Up next is a showdown against the Golden State Warriors on Sunday. The tip time will be the equivalent of a 9 a.m. start for the California-based Warriors and Orlando is hopeful that it slows down the NBA’s most high-powered offense.