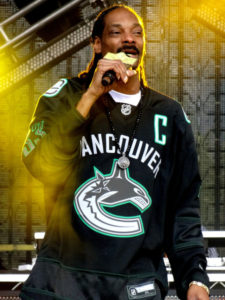 NHL is trying to step it up and reach beyond their typical demographic during it’s All-Star weekend. The events kick off this today in Los Angeles and The Undefeated just revealed that California hip hop icon Snoop Dogg will be taking place in the festivities.

Snoop will be DJ-ing during the the NHL Skill’s competition. This will definitely be a highlight of the weekend. Typically, the skills competition is usually very competitive and the players  let loose.

To be fair, this isn’t a total celebrity grab for the league, either. Snoop has been known to show up to hockey games for some time in Southern California, and he’s been supporting pucks from a style standpoint for more than 20 years.

Snoop can be seen in his music videos wearing hockey jerseys and he Snoop’s never been afraid to mix it up with actual hockey personalities on-air, either. The cultural connectivity between Canadian commentators trying to bridge the divide between themselves and Long Beach, California, was always fun to watch.