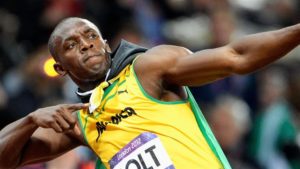 Usain Bolt expressed his unhappiness for returning one of his nine gold medals due to a doping case involving teammate Nesta Carter.

“I wasn’t pleased — nobody would be pleased over the years to lose a medal,” Bolt said Friday. “It’s just one of those things — things happen. I’m not happy about it but what can I say?”

The IOC said Wednesday that Carter tested positive for methylhexaneamine, a banned stimulant, in reanalysis of samples from the 2008 Beijing Olympics.

“I haven’t seen Nesta now but I hope he’s not blaming himself too much about this,Bolt said of his teammate. “It’s just one of those things that happen in life I guess. So I just wait and see what happens.” 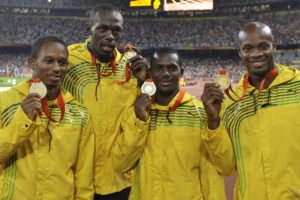 Carter and Bolt were teammates on the winning 4×100-meter relay team, which also included Michael Frater and Asafa Powell.

Asked if he thinks it would affect his legacy, Bolt said: “Personally I don’t think it should. I’ve worked hard over the years. I’ve shown my dominance throughout the years. I think by losing one medal that shouldn’t be a problem, you understand, because I’ve done individual events and I’ve won all three (gold medals) at three Olympics.”

The relay title in Beijing completed the first of Bolt’s three gold-medal sweeps in the 100, 200 and relay at three straight Olympics.

Trinidad and Tobago is in line to get the gold medal from 2008, Japan could be upgraded to silver, and fourth-place finisher Brazil could get the bronze medal.