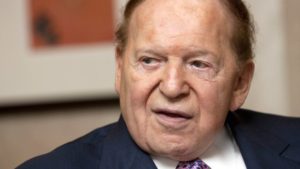 In shocking news, Las Vegas Sands CEO Sheldon Adelson withdrew from the ongoing effort to finance a new $1.9 billion stadium in Las Vegas for the Oakland Raiders. The news was revealed on Monday.

It was announced yesterday that Goldman Sachs has pulled out as well.

Only one week ago, prospects for the Raiders to move to Las Vegas looked positive. Adelson had committed $650 million in personal wealth to the building of a glitzy new stadium in Vegas for the Raiders to play in;  the Raiders had committed $500 million; officials in Clark County, Nev., had approved $750 million in public funding, to be raised by increasing the hotel room tax; the team had filed its relocation papers to the NFL.

Then on Monday night, the Adelson family released a statement expressing outrage over the Raiders submitting a lease proposal that excluded them.

“It was certainly shocking to the Adelson family,” the statement said. “We were not only excluded from the proposed agreement; we weren’t even aware of its existence… It’s clear the Raiders have decided their path for moving to Las Vegas does not include the Adelson family… Regrettably, we will no longer be involved in any facet of the stadium discussion.” 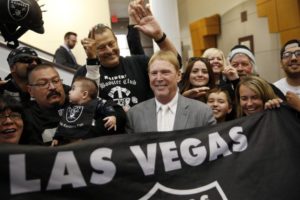 The Raiders put out a statement in response: “The Raiders deeply appreciate the efforts of the Adelson family to bring the Raiders to Las Vegas… We know this project could not have advanced to this point without them. The Raiders remain steadfast in honoring Mark Davis’ commitment to Governor Sandoval and the State of Nevada to pursue relocation to Las Vegas.”

Even without Adelson, the Raiders’ relocation effort should have been on track, based on a Las Vegas Review-Journal report earlier this month that said Goldman Sachs “is committed to financing the team’s proposed domed stadium in Las Vegas with or without an investment from casino executive Sheldon Adelson.”